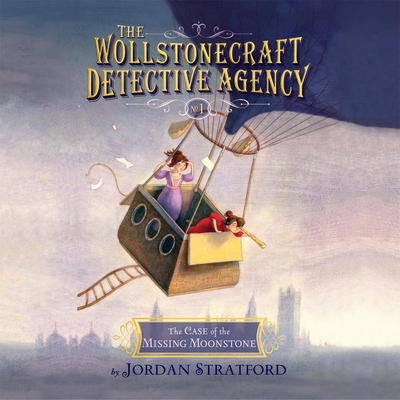 This is book number 1 in the The Wollstonecraft Detective Agency series.

Eleven-year-old math prodigy Ada Lovelace, daughter of the famous and infamous poet Lord Byron, is a genius. Isolated, awkward and socially inept—but a genius. Mary Godwin, age 14, daughter of radical philosopher William Godwin and feminist writer Mary Wollstonecraft, is a romantic. It has been arranged for Mary and Ada to be tutored by the young man who calls himself Percy B. Snagsby, a nervous fellow who may or may not be a spy. Every day, Mary rides to the Byron estate in a carriage accompanied by Charles, a stowaway boy she is supposed to pretend isn’t really there and who all the while keeps his nose in a book.

As the two girls become fast friends, their irrepressible curiosity leads to the formation of the secretive Wollstonecraft Detective Agency. Their first case involves a stolen pendant, a false confession, and an array of fishy suspects—but these are no match for the deductive powers and bold hearts of Ada and Mary.

Playful historical references and witticisms abound in this comic romp featuring Newgate Prison, a renegade hot-air balloon ride across the rooftops of London, and word-play worthy of the literary characters who inhabit the story. The Case of the Missing Moonstone is funny and fanciful middle-grade fiction that is guaranteed to delight readers of all ages.

JORDAN STRATFORD has been pronounced clinically dead, and was briefly mistakenly wanted by INTERPOL for international industrial espionage. He is an ordained priest, has won numerous sword fights, jaywalked across the streets of Paris, San Francisco, and São Paulo, and was once shot by a stray rubber bullet in a London riot. He lives on a tiny windswept Pacific island populated predominantly by realtors and carnivorous gulls.

NICOLA BARBER has appeared on stage in New York and across the country, including with Scarlett Johnansson in <i>The Nanny Diaries.</i> She holds a degree in theatre arts from UNC-Chapel Hill, and has taken classes at the London Academy of Dramatic Art. She has been training and performing voiceovers since 2001, and can be heard in video games, animation, commercials, and corporate videos, as well as on award-winning audiobooks.