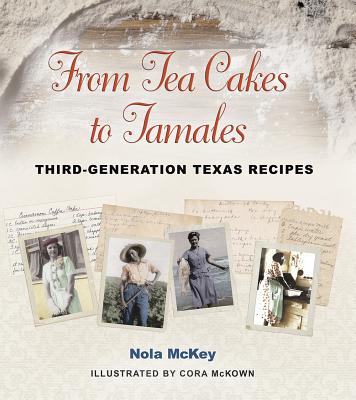 Join journalist-turned-culinary historian Nola McKey on a Texas journey as she explores the state’s foodways through heirloom recipes. In this collection of more than one hundred third-generation (and older) recipes, Texans share not only the delicious dishes they inherited from their ancestors but the stories and traditions that accompany them. With a strong focus on Texas’ cultural diversity—recipes include Norwegian rosettes, Italian pizzelle, Czech sauerkraut, Chinese fried rice, Mexican caldo, Wendish noodles, and African American purple hull peas—McKey documents the culinary impact of ethnic groups from around the globe.

But this book is not for foodies alone; history enthusiasts will appreciate the snapshots of daily Texas life captured in the narratives accompanying recipes that span more than a century. Told primarily in the words of today’s cooks, these multigenerational family recollections can take anyone on a trip down memory lane, back to a beloved grandmother’s kitchen or a great-aunt’s holiday table.

Additionally, McKey provides tips for preserving your own family recipes and for recording the heritage surrounding a special dish. She also includes recommendations for festivals and museums where readers can learn more about Texas foods and cultures.

Illustrated with family photos and original watercolors by Cora McKown, From Tea Cakes to Tamales: Third-Generation Texas Recipes will, itself, quickly become a Texas family heirloom.

“Nola McKey’s From Tea Cakes to Tamales: Third-Generation Texas Recipes made me want to do three things right off:  1. read the fascinating recipe stories through the whole darn book all in one sitting, 2. start picking out favorites to make (Nola’s grandmother’s tea cakes for starters!), and 3. wonder what’s taken me so long to do the very same thing with the treasure chest of my own family recipes!  Deliciously sentimental, this inspirational book invites the reader into the lives and kitchens of those who created the culinary culture that is uniquely Texas. As the former Southwest Food Editor for Southern Living, this book would have been the only research source I would have needed years ago. Every cook who claims to be Texan should have one. Now it will be a staple in my kitchen – I can’t wait to get cookin’!  No, wait….first I think I’ll snuggle up with it for a good read… Either way, From Tea Cakes to Tamales is a must for all who enjoy cookbooks and good stories.” — Deborah Garrison Lowery, former Southwest Foods Editor, Southern Living
— Deborah Garrison Lowery, former Southwest Foods editor, Southern Living

“This work from the heart of Nola McKey will speak to anyone who values food traditions passed down through generations. It speaks to family heritage and the memories we treasure of days we helped Grandma in the kitchen and those moments when we broke bread with our nearest and dearest. Finally, those of us who ache for a taste of long-lost recipes will likely find satisfaction in these pages.”— June Naylor, author co-author of The Texas Cowboy Kitchen; Cooking the Cowboy Way; and the Big Ranch, Big City Cookbook
— June Naylor