Austin to ATX: The Hippies, Pickers, Slackers, and Geeks Who Transformed the Capital of Texas (Hardcover) 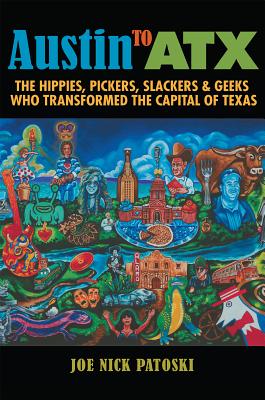 In this gonzo history of the “City of the Violet Crown,” author and journalist Joe Nick Patoski chronicles the modern evolution of the quirky, bustling, funky, self-contradictory place known as Austin, Texas. Patoski describes the series of cosmic accidents that tossed together a mashup of outsiders, free spirits, thinkers, educators, writers, musicians, entrepreneurs, artists, and politicians who would foster the atmosphere, the vibe, the slightly off-kilter zeitgeist that allowed Austin to become the home of both Armadillo World Headquarters and Dell Technologies.

Patoski’s raucous, rollicking romp through Austin’s recent past and hipster present connects the dots that lead from places like Scholz Garten—Texas’ oldest continuously operating business—to places like the Armadillo, where Willie Nelson and Darrell Royal brought hippies and rednecks together around music. He shows how misfits like William Sydney Porter—the embezzler who became famous under his pen name, O. Henry—served as precursors for iconoclasts like J. Frank Dobie, Bud Shrake, and Molly Ivins. He describes the journey, beginning with the search for an old girlfriend, that eventually brought Louis Black, Nick Barbaro, and Roland Swenson to the founding of the South by Southwest music, film, and technology festival.

As one Austinite, who in typical fashion is simultaneously pursuing degrees in medicine and cinematography, says, “Austin is very different from the rest of Texas.” Many readers of Austin to ATX will have already realized that. Now they will know why.

JOE NICK PATOSKI is the author of Willie Nelson: An Epic Life; Generations on the Land: A Conservation Legacy; The Dallas Cowboys: The Outrageous History of the Biggest, Loudest, Most Hated, Best Loved Football Team in America; and other titles and director of Sir Doug and the Genuine Texas Cosmic Groove, a documentary film about Texas musician Doug Sahm that premiered at the 2015 South by Southwest Film Festival. After living twenty-two years in Austin, Patoski now resides in Wimberley, Texas.