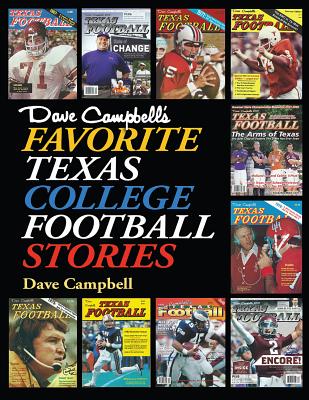 A Texas sports legend, Dave Campbell started his annual fall football preview magazine, Dave Campbell’s Texas Football, in 1960. Widely referred to as “the bible” by coaches, fans, and sportswriters, the magazine’s July arrival in supermarkets, convenience stores, and sporting goods suppliers across Texas is a yearly event eagerly awaited by thousands of high school and college football players and their families, friends, and fans.

In Dave Campbell’s Favorite Texas College Football Stories, Campbell has gathered columns and articles about those college contests he considers the all-time greatest over the course of his career, from 1953 and continuing through 2016. Accounts of storied players, classic rivalries, revered coaches, and unforgettable games are illustrated with historic photographs of athletes, teams, and on-the-field action. Readers will relish this guided tour of Texas collegiate football history, presented by a writer who is a walking trove of Lone Star sports lore.

Dave Campbell’s Favorite Texas College Football Stories, which also features full-color reproductions of more than five decades of magazine covers, is sure to become a collector’s item for Texas football fans of all ages. Seasoned enthusiasts will delight in reliving their favorite pigskin memories, and younger readers will enjoy experiencing this press-box view of the state’s gridiron greats.

DAVE CAMPBELL, dean of Texas sports journalists, is the founding editor of Dave Campbell’s Texas Football magazine. A 2005 inductee into the Texas Sports Hall of Fame, he lives in Waco, where he was the sports editor of the Waco Tribune-Herald from 1953 to 1993.

“Dave Campbell is a Texas treasure. Since 1960, his Texas Football magazine has been a must read for football fans in the Lone Star State. And now his new book Dave Campbell's Favorite Texas College Football Stories is bringing back memories of Southwest Conference and Big 12 games that Dave has covered from 1953 all the way through the present. There are stories of games and interesting back stories on some of the greatest football games and college stars over more than 60 years in Texas. If you are a football fan in Texas -- and who isn't ?-- you won't be able to put this book down. The memories and the names will keep flooding back as you read it.” — Al Pickett, Abilene sports writer, sportscaster, and author of Mighty, Mighty Matadors
— Al Pickett

"Great coaches such as Darrell Royal, Grant Teaff, Bill Yeoman, Emory Bellard, R.C. Slocum, Bear Bryant, Mack Brown, and Spike Dykes are just a few of the iconic names in the history of the game. Dave knew them all and provides us with an insider’s view. . . . The games of the past continue to hold our fascination. Who can forget the Miracle on the Brazos, the Red River shootouts and the many terrific Cotton Bowl matchups?  Dave affords us a look back into the history of these legendary games. His recall of specific plays and details make Dave Campbell the ultimate story-teller when it comes to football in the Lone Star State." —Charles Breithaupt, executive director, Texas University Interscholastic League

“Dave Campbell’s Favorite Texas College Football Stories weaves a tapestry of the rich history of college football in Texas. No participant or observer has enjoyed a better vantage point from which to produce a chronicle of the extraordinary people and events that define the college game in the best football state in America.  Dave Campbell has made wonderful use of his 93 years, and football fans everywhere will relish his remarkable journey through the history of Texas college football.”—Bob Bowlsby, commissioner, Big 12 Conference
— Bob Bowlsby

"Dave Campbell has been a great ambassador for Texas sports, both in his writing and in his personal integrity. I consider him an encyclopedia of Texas football knowledge, and his in-depth coverage is unmatched."—Gerald Myers, athletic director emeritus, Texas Tech University
— Gerald Myers