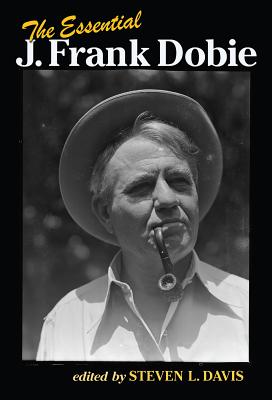 Setting out to create a collection of J. Frank Dobie’s writing that “brings him alive and makes him relevant to current generations of readers,” Steven L. Davis has combed through the works of this renowned Texas author, gathering together in one volume Dobie’s most vital writings. Dobie’s stories and essays here are meticulously edited to “prune away some of the brushy undergrowth” and bring Dobie’s folksy, erudite voice bounding back to life.

The result is The Essential J. Frank Dobie, a treasury that introduces new readers to Dobie—and reminds older ones that Dobie captured priceless social history while producing some of the most fascinating, best-informed writing about Texas. Dobie bore eloquent witness to the passing of ancient pastoral lifeways and was decades ahead of his time in championing civil rights and protecting the environment. Davis, a Dobie biographer, has found the stories only the master himself could tell—those enriched by his matchless personal adventures, from Mexico to wartime Europe to the remote outback, where he joined wandering seekers on their quests for lost treasures.

Featuring previously published works as well as writing that has never before appeared in book form, The Essential J. Frank Dobie will intrigue, inform, and delight readers: both those who know Dobie’s work as an old acquaintance and those who are meeting him for the first time in these pages. As Davis concludes, “the spirit of Dobie is as alive as ever. May you be nourished by it."


All of the author's royalties from The Essential J. Frank Dobie will go to the J. Frank Dobie Library Trust to help small Texas libraries purchase books.

STEVEN L. DAVIS is the literary curator of the Wittliff Collections at Texas State University in San Marcos. His books include J. Frank Dobie: A Liberated Mind, Texas Literary Outlaws: Six Writers in the Sixties and Beyond, and (as coauthor) Dallas 1963, which won the 2014 PEN USA Award for Research Nonfiction. He is a past president of the Texas Institute of Letters.

“I recently referred in print to J. Frank Dobie as an ‘old-timey’ writer. I wish I had read this revelatory collection before tossing off that description. Under Steven L. Davis’s careful curation, Dobie emerges here as an unquestionably modern figure.  His luminous and biting  prose—as nature writer, travel writer, historian and public intellectual—feels unconfined by time and place, and as a passionate witness to the devastation of war and the destruction of the natural world he speaks to us now with a new urgency. The Essential J. Frank Dobie really is an essential book.”—Stephen Harrigan
— Stephen Harrigan

“What a wonder! The Essential J. Frank Dobie, carefully and graciously edited by Steven L. Davis, is the book we have long been awaiting. Dobie's unquenchable enthusiasm, passion for our state, and eloquent reveries on the poignant losses of time and change, feel crucial right now.

How could anyone ever have criticized Dobie? I think they were jealous. Few people have carried an appetite for collection as great as Dobie's. Here, Dobie and Davis, with helpful contextual commentary, offer everything from cedar fever anguish to an astonishing image of fireball lightning erupting on the horn-tips of an entire herd of longhorns during a mighty storm –

Once I had occasion to spend a solitary night in Dobie's Austin house, sleeping on a couch, and read the entire scrapbook of Dobie's early life off a bookshelf. A news clipping said Dobie visited a Dallas Tea Society and afterwards shook the hand of every single guest. This rich anthology does the same.”— Naomi Shihab Nye, Young People's Poet Laureate, Poetry Foundation
— Naomi Shihab Nye

“Despite J. Frank's Dobie's popularity as a legendary figure, his reputation as a writer has been compromised by a questioning of his literary status.  He is often relegated to restrictive labels—‘regional writer,’ folklorist. Editor Steve Davis's selection ranges from Dobie's then-controversial, still-relevant essays on politics, human rights, academia, to his fiction, rich with sharply drawn, memorable characters and poignant memories. This fine collection asserts that J. Frank Dobie is an authentic author in the realm of American literature.” —John Rechy, author of City of Night and The Miraculous Day of Amalia Gómez — and the first novelist to win the PEN USA award for Lifetime Achievement

“My mom remembered Dobie on the family’s porch in Cotulla, sitting with my grandfather and his compadres, listening to their stories and recording them with a pencil in a little notebook. As a kid, I sought him out as ‘that writer’ connected to our Lopez family, whose work revealed Texas to me as a great human epic, from its indigenous origins, through its Mexican settlement, and later, the arrival of people from all over the world. His voice was full of compassion and curiosity.  His Texas was a place of astounding transformations, of ‘vanished races, vanished centuries, and vanished ways of human life.’  In this elegantly assembled anthology, Steven L. Davis reminds us of Dobie’s legacy as a literary natural historian and poetic ethnographer from the Brush Country, of his vision of a ‘greater Tejas’ that spanned at least from the Sierra Madre to the Panhandle, of a free thinker who could connect the hardscrabble life of old Texas with the destiny of humanity itself. This necessary volume makes clear: No writer concerned with the question of Texas should ignore Dobie.”—John Phillip Santos
— John Phillip Santos