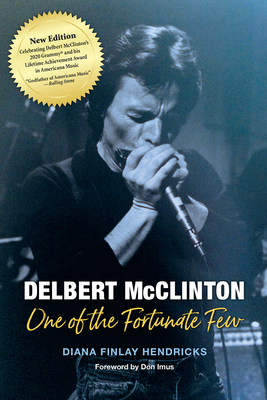 “Delbert McClinton’s many fans will find One of the Fortunate Few reaffirming, shedding light on a truly selfless, generous soul. Those unfamiliar with Delbert will be instantly drawn to him and will undoubtedly seek out his music and touring schedule. When you realize McClinton was playing at the birth of rock n’ roll in the ’50s, shared some harmonica tips with John Lennon, and has played just about every kind of American music in every conceivable venue from dives to the world’s biggest stages, you can’t help but admire this living legend. His story is of endurance, sacrifice, perseverance, and ultimately success in the unforgiving often cruel music business.”—Elmore Magazine

DIANA FINLAY HENDRICKS, a Texas Hill Country–based writer has spent her career in journalism and feature writing, focusing on Texas and Southern music and culture. She is a regular contributor to the Journal for Texas Music History, Lone Star Music, and recently contributed the James McMurtry chapter to Pickers and Poets: The Ruthlessly Poetic Singer-Songwriters of Texas. .