Persiana: Recipes from the Middle East & beyond (Paperback) 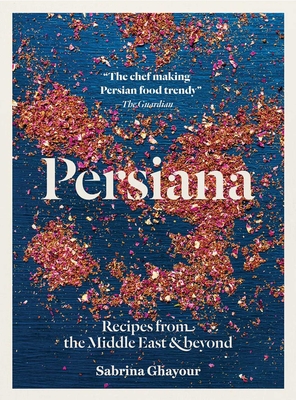 "This is an outstanding collection that will surely win readers over and inspire many a meal." ‚ÄîPublishers Weekly "With this stunning collection of approachable Middle Eastern recipes, the author dispels the notion that Persian, Turkish, Arab, and Armenian cuisines are too complicated for home cooks. In six chapters overflowing with photos of vibrantly sauced and garnished foods, she presents small plates, breads, salads, desserts, and other dishes that can be served individually or as part of a feast. VERDICT In a word, outstanding." ‚ÄîLibrary Journal, starred review "This is Ottolenghi with rocket fuel." ‚ÄîThe Times "Loving Persiana." ‚ÄîNigella Lawson "The loveliest cookbook I've seen in a very long time." ‚ÄîDaily Mail (Ireland) "The most exciting debut cookbook of the year." ‚ÄîSunday Telegraph "The most appetising book. I want to eat every page of it." ‚ÄîPierre Koffman, 3 Michelin star chef "Persiana‚Ä¶is Sabrina Ghayour's first book and it's crammed full of wonderfully cookable recipes‚Ä¶ I'd like to cook and eat everything in it‚Ä¶They're very much geared to a modern lifestyle‚Ä¶ Unlike other Middle Eastern cookbooks, this one is easy to decipher, packed with lots of flavor and recipes are surprisingly easy to pull off." ‚ÄîHuffington Post "Tehran-born Ghayour can help you load your table with incredible feasts." ‚ÄîSunday Times Travel Magazine "A lovingly-written homage to the enchanting dishes of the Middle East. Sabrina Ghayour takes the reader on her magic carpet to the ancient and beautiful lands of rose-scented sherbets... and to a table of abundant feasts, and of honeyed and spiced delights. What a fantastic treasure trove of good food! Within these pages, the cook will find recipes for tagines, soups, stews, salads and plenty of sweet treats. Through the pages of Persiana, Sabrina delivers the Eastern promise in its delicious, gastronomic form. If you want to eat like an Arabian Knight, then start here... but be sure to stock up on cinnamon, cumin and coriander..." ‚ÄîRaymond Blanc "Sabrina Ghayour is a phenomenal Persian chef." ‚ÄîGizzi Erskine "Sabrina cooks the kind of food I love to eat: lots of flavors distilled out of love and generosity. In this book Sabrina demystifies the use of spices. The Eastern promise is definitely delivered in her book and it will have a place on the shelves of my kitchen." ‚ÄîBruno Loubet

LIBRARY JOURNAL COOKBOOK OF THE YEAR 2014

THE TELEGRAPH BEST COOKBOOK TO READ IN 2014

THE SPECTATOR BEST COOKBOOK OF THE YEAR 2014

A celebration of the food and flavors from the regions near the Southern and Eastern shores of the Mediterranean Sea, with over 100 recipes for modern and accessible Middle Eastern dishes, including Lamb & Sour Cherry Meatballs; Chicken, Preserved Lemon & Olive Tagine; Blood Orange & Radicchio Salad; Persian Flatbread; and Spiced Carrot, Pistachio & Coconut Cake with Rosewater Cream.

Sabrina Ghayour is one of the strongest voices in Middle Eastern food today. This chef, food writer, cooking teacher, and author of four bestselling cookbooks is the charismatic Persian-born host of the popular London supper clubs specializing in Persian and Middle Eastern flavors. With regular appearances on the BBC Good Food Show, Taste London and more, her work has been featured in numerous publications, including The New York Times, The Washington Post, Los Angeles Times, The Times, the Sunday Times, the Evening Standard, The Guardian, The Independent, The Telegraph, Delicious magazine, and BBC Good Food magazine.