Contact Sport: A Story of Champions, Airwaves, and a One-Day Race Around the World (Hardcover) 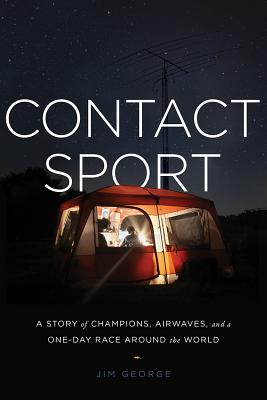 In the woods of Massachusetts, pairs of contestants huddle in tents filled with communications equipment. Their voices soar through the air, riding waves into the atmosphere, as they comb through static and noise for a response from the other side of the world. They re searching for loot in the form of other voices in the sky. The rarer their contact, the more valuable their treasure.

Joining them in their quest is author J.K. George, an experienced radio operator himself, who guides you through the exciting world of amateur radio competition and the intriguing characters of the 2014 World Radiosport Team Championship. The competitors hail from across the planet from youthful challengers to veterans with decades of radiosporting experience. You will meet fascinating personalities not only among the teams themselves but also among their widows spouses left behind for the allure of the airwaves.

They battle computer malfunctions, getting lost, and staying at the top of their game for 24 hours in a hot, stuffy tent. The final scores bring surprises, disappointments, even a recount, and decades-long friendships will be stressed in the fight for the crown of amateur radio the ultimate contact sport.

J.K. (Jim) George (N3BB) has been an avid amateur radio enthusiast, with special love for Morse code and radiosporting, since his teenage years over fifty years ago. He started his hobby listening to short-wave broadcasts and long-distance AM radio stations. He is a graduate of Virginia Tech, where he was president of the VT Amateur Radio Club and was inducted into the Virginia Tech Academy of Engineering after serving as Chair of the Advisory Boards for both Electrical and Computer Engineering, as well as the College of Engineering. He is an avid Virginia Tech sports fan. He completed his graduate school at Arizona State University, specializing in semiconductor materials physics. George s professional career was primarily at Motorola, where he worked in the semiconductor business for nearly forty years and served as corporate vice president for nearly fifteen years. Following his retirement, George was a founding member and served for several years on the advisory board for KUT-FM, the public radio station of the University of Texas at Austin. George enjoys reading and writing and has been a member of a small men s book club in Austin for over a decade. He and his wife live in the Hill Country west of Austin, and have three grown children and five grandchildren. His first book was Reunion, a novel about a difficult relationship between a father and son, as well as life-long friendships within a unique high-school peer group."