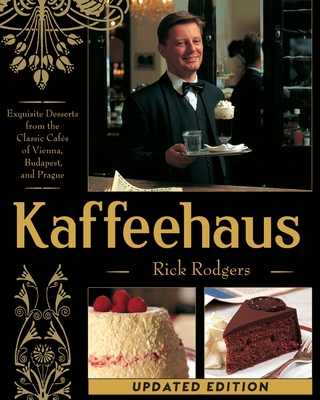 Take a tour of the legendary caf's of Vienna, Budapest, and Prague where a rich tradition of masterful desserts and coffee lives on. For centuries, artists and philosophers have gathered around coffeehouse tables to complement their lively conversations with exquisite desserts. Modern caf's of this region remain loyal to this pastry tradition; though the d cor has changed, it is still strudel-not lemongrass sorbet-that is served on the menu.

In Kaffeehaus, Rick Rodgers celebrates 300 years of tradition with over 150 of the best classic Austro-Hungarian pastries. Using his celebrated skill as a teacher to present the recipes to bakers of all levels, Rodgers expertly shows how to create these glorious treats at home. Included are the explanations of the different kinds of batter, dough, and icing that form the foundation of this baking tradition, in addition to the many beverages-coffee or otherwise-that pair perfectly with the desserts.

This revised second edition features new charts for ingredient weights and measures in addition to updated content and resource lists. One of the few books on authentic Austro-Hungarian baking written in English with recipes for American kitchens and their ingredients. Kaffeehaus beautifully captures the taste and elegance of these caf's, commemorating their culture, history, and the delectable legacy of their desserts.

Rick Rodgers is an award-winning cookbook writer and culinary instructor. An author of over forty diverse books, Rick co-authored Sarabeth's Kitchen and The Model Bakery Cookbook and edited The Baker's Dozen Cookbook. Rick often works behind the scenes as a consultant for entertainment figures, celebrity chefs, and corporations to develop their cookbook projects, including over ten cookbooks for Williams-Sonoma. His recipes have appeared in a number of publications such as Cooking Light, Men's Health, Food and Wine, and many sites online, including Epicurious. He has also presented on television shows such as Today, CBS Good Morning, and Food Network Challenge. Winner of Bon App tit's Outstanding Cooking Teacher of the Year Award, Rodgers teaches sold-out cooking classes around the world (including Korea and France). You can learn more at www.RickRodgers.com.