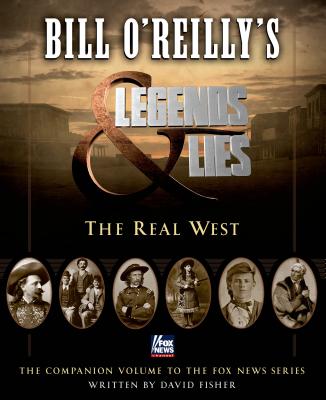 By David Fisher, Bill O'Reilly
$32.00
Not available to order.

The must-have companion to Bill O'Reilly's historic series Legends and Lies: The Real West, a fascinating, eye-opening look at the truth behind the western legends we all think we know

How did Davy Crockett save President Jackson's life only to end up dying at the Alamo? Was the Lone Ranger based on a real lawman-and was he an African American? What amazing detective work led to the capture of Black Bart, the "gentleman bandit" and one of the west's most famous stagecoach robbers? Did Butch Cassidy and the Sundance Kid really die in a hail of bullets in South America? Generations of Americans have grown up on TV shows, movies and books about these western icons. But what really happened in the Wild West? All the stories you think you know, and others that will astonish you, are here--some heroic, some brutal and bloody, all riveting. Included are the legends featured in Bill O'Reilly's ten week run of historic episodic specials-from Kit Carson to Jesse James, Wild Bill Hickok to Doc Holliday-- accompanied by two bonus chapters on Daniel Boone and Buffalo Bill and Annie Oakley.

Frontier America was a place where instinct mattered more than education, and courage was necessary for survival. It was a place where luck made a difference and legends were made. Heavily illustrated with spectacular artwork that further brings this history to life, and told in fast-paced, immersive narrative, Legends and Lies is an irresistible, adventure-packed ride back into one of the most storied era of our nation's rich history.

BILL O’REILLY’s success in broadcasting and publishing is unmatched. He was the iconic anchor of The O'Reilly Factor, the highest-rated cable news broadcast in the nation for 16 consecutive years. His website BillOReilly.com is followed by millions all over the world, his No Spin News is broadcast weekday nights at 8 and 11 (ET) on The First TV, and his O’Reilly Update is heard weekdays on more than 225 radio stations across the country. He has authored an astonishing seventeen #1 bestsellers; his historical Killing series is the bestselling nonfiction series of all time, with over 18 million books in print. O’Reilly has received a number of journalism accolades, including three Emmys and two Emmy nominations. He holds a History degree from Marist College, a master's degree in Broadcast Journalism from Boston University, and a master’s degree from Harvard’s John F. Kennedy School of Government. O’Reilly lives on Long Island where he was raised. His philanthropic enterprises have raised tens of millions for people in need and wounded American veterans.