The Complete Works of William Shakespeare: Pericles, Prince of Tyre: With Annotations and a General Introduction by Sidney Lee (Paperback) 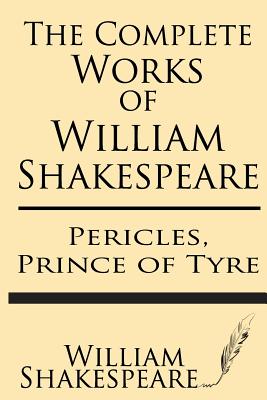 The Complete Works of William Shakespeare
Pericles, Prince of Tyre with Annotations and a General Introduction by Sidney Lee

By William Shakespeare
Introduction The apocryphal works of Shakespeare are even more various in values than the apocryphal books of the Bible. There is hardly as much difference between the sub- lime "Wisdom of Solomon " and the nursery tale of " Bel and the Dragon " as between the glorious torso of " The Two Noble Kinsmen " and the abject futility of "Mucedonis " or "Locrine." There are two plays, and only two, certain that Shakespeare wrote the nobler part as that Shakespeare did not write the whole. The one is taken from the "Knight's Tale," of Chaucer, the other from an episode in Gower's " Confessio Amantis." In the one case the unfinished work of Shakespeare was completed by the feebler and yet the accomplished and the dexterous hand of a lesser and yet a great dramatic poet; in the other case the hand of Shakespeare touched and transfigured, recreated and recast, the work of an obscure precursor whose sketch he did not always give himself the trouble to correct and repaint, but chose rather now and then to leave as it stood in the rough, with an incongruous touch of unseasonable splendor flung in or thrown on here and there. It is not easy to say exactly where the work of revision or interpolation begins or ends. We may be misled and dazzled into misjudgment and injustice by the beauty of single lines or short passages, which on reconsideration may not seem so far superior as at first they seemed to the not always un- worthy context. There is true poetic dignity through- out in the part of Pericles: and the fitfully frequent relapses into rhyme which help to make the style of the earlier scenes seem cruder and more juvenile than that of the last three acts are merely, it may be, signs of haste and indifference rather than of inferiority and illegitimacy. The scene with the fishermen is at once like Shakespeare and like Heywood: either of the two might have written it. No one who knows the lesser poet will deny this; and no one can fail to see how this explains the curious and at first sight startling collocation of his name and of Dekker's with the name that is above every name in the famous passage which places on record the wish of Shakespeare's greatest disciple that what he wrote should be read by their light. All the second act; be the text canonical or apocryphal must evidently have been written at the gallop of the pen. The moral or spiritual charm of Shakespeare's work is as nearly indefinable as it is incomparable. There are touches or strokes of something like it now and then in Homer and the Hebrews; but they flash across the text and pass away. Divine atrocity and... ------------------------------------------------------------------------------------------------------------------------------------------ Windham Press is committed to bringing the lost cultural heritage of ages past into the 21st century through high-quality reproductions of original, classic printed works at affordable prices. This book has been carefully crafted to utilize the original images of antique books rather than error-prone OCR text. This also preserves the work of the original typesetters of these classics, unknown craftsmen who laid out the text, often by hand, of each and every page you will read. Their subtle art involving judgment and interaction with the text is in many ways superior and more human than the mechanical methods utilized today, and gave each book a unique, hand-crafted feel in its text that connected the reader organically to the art of bindery and book-making. We think these benefits are worth the occasional imperfection resulting from the age of these books at the time of scanning, and their vintage feel provides a connection to the past that goes beyond the mere words of the tex.