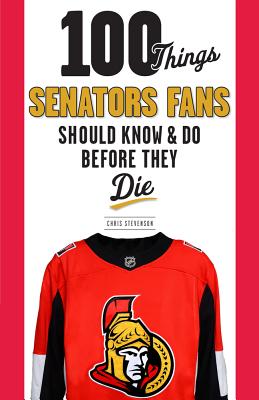 Most Ottawa Senators fans have attended a game at the Canadian Tire Centre, seen highlights of a young Daniel Alfredsson, and remember exactly where they were when the team reached the Stanley Cup Final in 2007. But only real fans know all the components of the trade which landed Jason Spezza or how to get a seat at Sens Mile. 100 Things Senators Fans Should Know & Do Before They Die is the ultimate resource guide for true fans of Ottawa hockey. Whether you're a longtime member of the Sens Army or a new supporter of Erik Karlsson, this book contains everything Senators fans should know, see, and do in their lifetime.

Chris Stevenson covers the Ottawa Senators for The Athletic, and appears on the team's pre- and post-game shows on TSN 1200. He previously covered the Senators for NHL.com and the Ottawa Sun. This is his first book.