We The Champs: The Toronto Raptors' Historic Run to the 2019 NBA Title (Paperback) 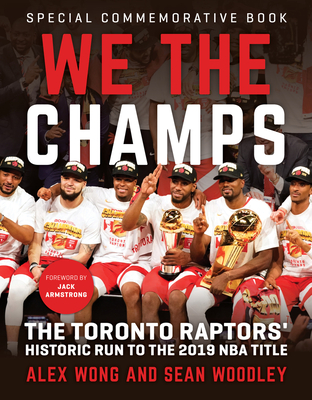 We The North. The slogan for the most successful era of Raptors’ basketball was elevated to a new level with the stunning off-season acquisition of superstar Kawhi Leonard. Finally breaking through after years of knocking on the door of the Eastern Conference, the Raptors made history and brought the first championship home to Toronto since the Blue Jays in 1993. From an intriguing new coaching hire in Nick Nurse, to the Leonard trade, to a midseason addition of Marc Gasol, the 2018-2019 season was one of changing the identity of the team, building chemistry, and leading to the franchise’s long-awaited first title. From making quick work of the Magic in the first round of the playoffs, to a Game 7 classic against the 76ers, to ripping off four straight wins versus the Bucks, the Raptors were destined to take down the defending champion Golden State Warriors on their way to becoming kings of the NBA.

Packed with expert analysis and dynamic color photography, We The Champs: The Toronto Raptors' Historic Run to the 2019 NBA Title takes fans through the Raptors’ historic and unforgettable journey, from Nurse and Leonard replacing Dwane Casey and DeMar DeRozan, to Pascal Siakam blossoming into a star, to Leonard’s unbelievable four-bounce Game 7 game-winner against the 76ers. This commemorative edition also includes in-depth profiles of Leonard, Kyle Lowry, Masai Ujiri, and other fan favorites who played key roles in Toronto’s extraordinary championship run.

Alex Wong is a freelance writer based in Toronto. He has followed the Toronto Raptors since their inception, and has covered and written about the NBA for various publications including The New Yorker, GQ, SLAM, New York Times, Yahoo Sports, The Atlantic and other places.

Sean Woodley is a freelance writer and broadcaster based in Hamilton, Ontario. He has been covering the Raptors for SB Nation's Raptors HQ since 2015, is the host of the daily "Locked On Raptors" podcast, and is a regularly heard voice on TSN 1150 Radio in Hamilton. Above his office desk sits a framed photo of his favourite Toronto Raptor, Terrence Ross.

Jack Armstrong is an NBA analyst and Toronto Raptors broadcaster for TSN. He has been the voice of the Raptors for two decades.