The New Odyssey: The Story of the Twenty-First Century Refugee Crisis (Hardcover) 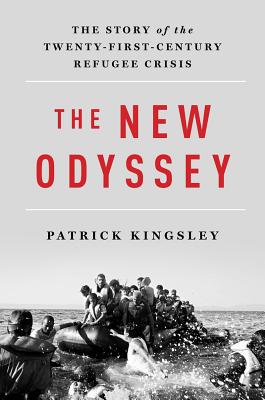 In the humane tradition of Katherine Boo’s Behind the Beautiful Forevers comes a searing account of the international refugee crisis.

On the day of his son’s fourteenth birthday, Hashem al-Souki lay somewhere in the Mediterranean, crammed in a wooden dinghy. His family was relatively safe—at least for the time being—in Egypt, where they had only just settled after fleeing their war-torn Damascus home three years prior. Traversing these unforgiving waters and the treacherous terrain that would follow was worth the slim chance of securing a safe home for his children in Sweden. If he failed, at least he would fail alone.

Hashem’s story is tragically common, as desperate victims continue to embark on deadly journeys in search of freedom. Tracking the harrowing experiences of these brave refugees, The New Odyssey finally illuminates the shadowy networks that have facilitated the largest forced exodus since the end of World War II.

The Guardian’s first-ever migration correspondent, Patrick Kingsley has traveled through seventeen countries to put an indelible face on this overwhelming disaster. Embedding himself alongside the refugees, Kingsley reenacts their flight with hundreds of people across the choppy Mediterranean in the hopes of better understanding who helps or hinders their path to salvation. From the starving migrants who push through sandstorms with children strapped to their backs to the exploitive criminals who prey on them, from the smugglers who dangerously stretch the limits of their cargo space to the volunteers who uproot their own lives to hand out water bottles—what emerges is a kaleidoscope of humanity in the wake of tragedy. By simultaneously tracing the narrative of Hashem, who endured the trek not once but twice, Kingsley memorably creates a compassionate, visceral portrait of the mass migration in both its epic scope and its heartbreaking specificity.

Exposing the realities of this modern-day odyssey as well as the moral shortcomings evident in our own indifference, the result is a crucial call to arms and an unprecedented exploration of a world we too often choose not to know.

Patrick Kingsley is the Guardian’s inaugural migration correspondent. An award-winning journalist, he has reported from more than twenty-five countries and is the author of The New Odyssey and How to Be Danish.

An essential account of a crisis we’ve hardly begun to grapple with.
— O, The Oprah Magazine

[A] a deeply reported account… Kingsley gives a sympathetic and often damning portrayal of the extraordinary risks and efforts that so many refugees have taken to find a new life. He puts a human face on the hyper-politicized refugee crisis while conveying the magnitude of the crisis.
— The Washington Post

[A] fascinating study…The New Odyssey start[s] to do for the refugees what British abolitionists did for the slave trade. [It] mobilize[s] eyewitness testimony to promote empathy, and through empathy, better policy.

A lucid and unflinching book that captures the ripples of the largest wave of mass migration since World War II. The New Odyssey delicately grapples with the task of encapsulating the crisis without diminishing its sprawling horror...The New Odyssey is a story that you cannot avoid.

A vivid picture of the human suffering that migrants face during their journey. . . . Anyone who thinks that the refugee crisis is a straightforward problem – to be solved with iron fences or with welcoming committees – will benefit from The New Odyssey...By looking at warm-hearted rescuers as well as cold-blooded smugglers, and possible solutions as well as grave problems, Kingsley finds the good – and the hope – in a truly massive challenge to our collective humanity.

[An] an urgent appeal to humanity and reason…a compelling read.
— New Republic

[One of] the most important books you will read this year…[Kingsley’s] experience reporting from the front lines of the crisis gives an unrivaled perspective…powerful.
— Suzanne Lynch - Irish Times

Bravely following the refugee crisis from the Middle East to the European Union as it gains volume and urgency…Kingsley (How to be Danish: A Journey to the Cultural Heart of Denmark, 2014) takes both a personal and altruistic approach to the massive migration of peoples fleeing Syria and other global hot spots…A powerful firsthand account of a crisis that will continue to receive even more attention in the years to come.

Policymakers can often forget the plight of the individual men, women, and children who have migrated. . . . The New Odyssey . . . chronicle[s] the uncertainties and fears of the courageous, desperate, and sometimes foolhardy voyagers. They offer an important rejoinder to the idea, widespread across Europe, that such journeys are acts of pure opportunism.

Tremendously impressive…The details are vivid, sometimes shocking, always telling; and the desperation and courage of those such as Hashem al-Souki are profoundly moving. The story of what lies behind the continuing and appalling news from the Mediterranean has rarely been told so strongly.
— Phillip Pullman

Kingsley is doing the world an invaluable service by showing that migrants are particular and human, not collective and a group, and that each of them—just like us—has a story of their own.
— David Hare