The Beginner's Guide to Mushrooms: Everything You Need to Know, from Foraging to Cultivating (Paperback) 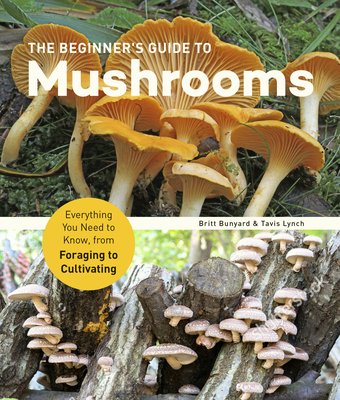 The Beginner’s Guide to Mushrooms is your ultimate guide to mycology. Whether you’ve never picked a mushroom before in your life or you’ve been cultivating mushrooms at home for ages, the expert advice in this comprehensive mushroom manual will transform your practice.

Never before have mushrooms generated so much interest, for their health benefits and medicinal properties, as well as a new understanding of their crucial role in a healthy environment and ability to regenerate damaged ones. If you are a newcomer, mycology, or the study of mushrooms and other fungi, can seem daunting. While other field guides are geared toward experts with advanced knowledge or regional in scope and aimed at only a few easy-to-recognize mushrooms, The Beginner’s Guide to Mushrooms by veteran mycologists Britt A. Bunyard and Tavis Lynch is a complete reference and guidebook to get you started identifying, cultivating, cooking, and preserving mushrooms.

The Beginner’s Guide to Mushrooms opens with important basics about wild mushrooming and how to use the book. Information about what fungi are and their role in the environment and around the home is provided in brief and very understandable terms. Basic wild mushroom anatomy is discussed along with how to identify mushrooms and various characteristics to look for—of great importance if you are interested in learning how to recognize edible wild species…as well as dangerous look-alikes. The guide then covers:

Begin your wonderful exploration of wild mushrooms with this accessible yet thorough beginner's guide.

Britt Bunyard, PhD, is the founder, Publisher, and Editor-in-Chief of the mycology journal Fungi. Britt has worked academically as a mycologist his entire career, writing scientifically for many research journals, popular science magazines, and books, most recently Mushrooms and Macrofungi of Ohio and Midwestern States (2012) by The Ohio State University Press. He has served as an editor for mycological and entomological research journals, and mushroom guide books. A popular evangelizer on all things fungal, Britt has been featured on NPR’s All Things Considered, PBS’s NOVA and Wisconsin Foodie television programs, and in The Atlantic, Vogue, Forbes, Saveur, Women’s World, and others. He serves as Executive Director of the Telluride Mushroom Festival. He is the co-author of The Beginner's Guide to Mushrooms (Quarry Books), author of Amanitas of North America book (The FUNGI Press), and. co-editor of MycoEpithalamia: Mushroom Wedding Poems (The FUNGI Press).

Tavis Lynch has been studying mushrooms for over three decades and teaches several mycology classes throughout the Upper Midwest. He is a regular guest on Wisconsin Public Radio and has been featured on “Around the Farm The Farm Table” on PBS. He owns and operates a large-scale mushroom farm in the north woods, growing mushrooms with a unique method that he developed. He is the author of Mushroom Cultivation and the co-author of The Beginner’s Guide to Mushrooms.

"...an interesting introduction to the mushroom world."—Washington Gardener