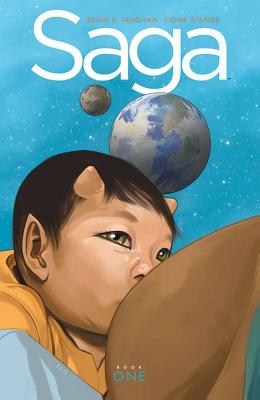 It's easy to run out of accolades for this superb series... The dialogue is smart, arch and always rings true, and the visuals, rendered digitally, are alluring and inventive. The Stalk, an eight-eyed, eight-limbed female bounty hunter, remains a creepy favorite. -The New York Times At long last, a deluxe hardcover of the Hugo Award-winning Saga is finally on its way Collecting the first three trade paperbacks (issues #1-18) of the smash-hit series, this massive edition features a striking new cover, as well as special extras, including never-before-seen sketches, script pages, and a roundtable discussion with the creators about how Saga is really made. Altogether, this hardcover contains over 500 pages for less than fifty bucks Written by Eisner Award-winning Best Writer Brian K. Vaughan (Y: The Last Man, The Private Eye) and drawn by Harvey Award-winning Best Artist Fiona Staples (Mystery Society, North 40) Saga is the story of Hazel, a child born to star-crossed parents from opposite sides of a never-ending galactic war. Now, Hazel's fugitive family must risk everything to find a peaceful future in a harsh universe that values destruction over creation. Kieron Gillen, Jamie McKelvie and Matthew Wilson return with an Eisner Award-nominated modern fantasy where gods are the ultimate pop stars and pop stars are the ultimate gods. Revel in the opulence of this over-sized hardback Revel in it Collects issues 1 through 11.