Robots: Explore the World of Robots and How They Work for Us (Fact Atlas Series) (Hardcover) 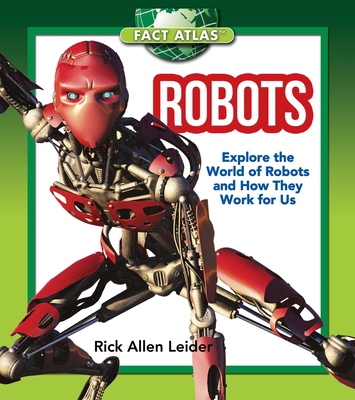 Robots exist for so many different reasons. Many robots replace humans, whether it’s because a situation is dangerous or just tedious. There are rover robots to explore space and drone robots that play a part in our military today, but then there are also vacuum robots available for the average household’s chores. In Japan, there is a robot teacher that can mimic a wide range of human emotions—including anger at uncooperative students—thanks to eighteen small motors hidden beneath the latex skin covering her face. The Japanese government hopes to use robots to fill jobs left vacant by an anticipated labor shortage due to an aging population. In the United States, robots even help with surgery, allowing for incisions to be cut much smaller than they would be otherwise—meaning fewer complications and faster recovery times.

This fascinating book in the Fact Atlas series explores the history of robots, from the very first robot designed by Leonardo da Vinci to predictions of the roles robots will play in our future. Kids will learn about how robots are often modeled after real life-forms, such as bees, sharks, and, of course, humans. Robots also takes into account the robots in pop culture—robots we have imagined could be a part of our future. Readers can decide for themselves whether or not they think robots should be developed to their fullest potential or kept in check by safety limitations.

Rick Allen Leider is an author, a film reviewer, and the editor in chief of the online review site The Black Cat Review, part of the telecommunications company Black Cat Media. He lives in New York City.