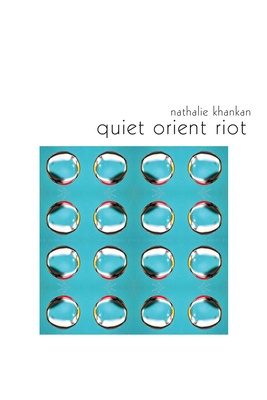 Quiet Orient Riot is an exploration of the tendons of motherhood, its mutinies and munificences. It is also a book of births and the politics of birth-regimes. Recounting a journey to bear a Palestinian child in the occupied Palestinian territory, the poems conjure up maternity as forecast, tally, weapon; its many filtrations through liturgical command and demographic anxiety. Maternity is made possible through contingent access to Israel’s sophisticated fertility treatment infrastructure, and it’s made impossible as it coincides with Israel’s 2009 assault on the Gaza Strip. What kind of language, then, can hold a body inside a body through emergency, diminishment, and into resistance and bloom? What kind of language might hold precarious humanhood?

Most significantly, Quiet Orient Riot asks of itself, without release or relief: can a text seek linguistic disorientation and reorientation both? Can a text walk the tightrope from detail to detail to envision a kind of awareness that is kin to worship? Quiet Orient Riot does not shy away from a word like “worship.” Nor does it shy away from how such worship might manifest in the words of a poem, bowing to a “chirpy printed sound” in Palestine and a forest of “little justices.”

Nathalie Khankan teaches Arabic language and literature in the Department of Near Eastern Studies at the University of California, Berkeley, and she is the founding director of the Danish House in Palestine. Her work has previously appeared in the Berkeley Poetry Review, jubilat, and Crab Creek Review. She lives in San Francisco with her husband and daughters.

"Urgent and open-hearted, this absorbing debut collection has Khankan (Arabic languages & literature, Berkeley) musing, 'to say i once wrote an email to mahmoud darwish i don’t know if he saw about being newly arrived in the occupied territories | before i knew to call it territory' . . . . this work will attract a broad cross-section of readers, whether their concerns are politics, parenting, or poetics."
— Library Journal

“An arresting debut collection, Khankan’s Quiet Orient Riot is like no other book of poems. Truly original in its approach to the poem and to saying anything, it stages a revolution against the spiritual and actual reduction of a people. . . . The poems steadfastly resist metaphor as if to say, nothing can stand in for the thing itself, or as if to say the thing itself stripped of artifice needs no new dressing. Khankan’s is a poetics of powerful imagistic nakedness. Here is where craft and urgency come together to create a voice that is both uncanny and iridescent. Here is where we’re compelled to come together, not in chorus, but in guttural gesture. If we need any book of poems now, it’s Quiet Orient Riot.”
— Dawn Lundy Martin, author of Good Stock Strange Blood

"The danger of delivery made courageous with this Quiet Orient Riot:her nerve endings are maternal. Nipples and bullets so close as to be barely distinguishable in this poetic unrelenting Palestine, where a woman tries to correspond with Darwish, and is driven to the far reaches of form. Khankan gives birth to a geopolitics of intimacy and exile that has no known beginnings or future. This is the work that changes you, that demands that you too, give, unyieldingly, as you are, in and out."
— Sarah Riggs, author of Autobiography with Envelopes

"All poetry is about the body, and the body is never one, always a multitude held together by variable processes, biologic and terrestrial. In Quiet Orient Riot, Nathalie Khankan speaks through 'all macrocosms of the uterine' beyond the frozen embryos in state of the art fertility centers. Pregnant in Palestine, she found herself 'where birth counts,' where birth is a regime: the state of Israel serves a woman’s will to conceive in the same breath it dominates Palestinian existence, administers to Palestinians conditional access to life: 'in this expired area/ I’ll bear another child,' the mother says. The book is inevitably packed with oracular and biblical echoes. No body seems possible without them in the Israel/Palestine chimera. But Khankan maintains a clarity of broken language in the shadows of the extant, doesn’t sacrifice tenderness, insists on deep listening to 'hear [a baby’s] eyelashes grow.' Quiet Orient Riot asks subversive questions about the body, more daring than what we find in the news: '[How] to be a mother and not also a national vessel'? When is common decency an alibi to the ethics of settler colonialism? When is liberalism a state of the art? Khankan’s poem liberates itself from the state that approved it as a demographic, a solidarity annexed. It's impossible to escape this book's power and its aporia and unsolved tensions. A flowering wound, it’s a Palestinian book in Empire. And yes, it does sing."
— Fady Joudah, author of Footnotes in the Order of Disappearance

"Quiet Orient Riot explores what it means to have a child in the occupied Palestinian territories. It is a book about holding tight to the intimacy and love for a child, a love that is presented here as independent of claims made by an occupying military and state. These are quiet poems, reminders of how to hold tight to deep loves in difficult times. And so they are at the same time, necessary poems."
— Juliana Spahr

"Poetically and politically, Quiet Orient Riot is a powerful book. In it Nathalie Khankan inhabits the unbearable contradictions between living in Ramallah under the Occupation in a period that saw the 2008 bloody assault on Gaza, and being able to conceive through an Israeli hospital’s fertility treatments. Drawing ironic analogies between 'body growth' and 'body count,' Khankan moves between the lyrical expression of a personal struggle to have a child and the dry citation of death and birth demographics in Israel and Palestine, leaving the gaping contrasts between them unresolved. Throughout, she lists instances of what she calls 'small little justice,' tokens of agency and resistance, and the joys of everyday life. And rather poignantly, she links quotations from the Qur’an with texts from the Hebrew Bible and Midrash about Hannah’s barrenness and Maryam’s labor pangs, holding out women’s linguistic and embodied courage as a reminder of the joint cultural heritage of Palestinians and Jews."
— Chana Kronfeld, Professor of Comparative, Hebrew, and Yiddish Literature, author of The Full Severity of Compassion: The Poetry of Yehuda Amichai