Texas Tales: Stories That Shaped a Landscape and a People (Paperback) 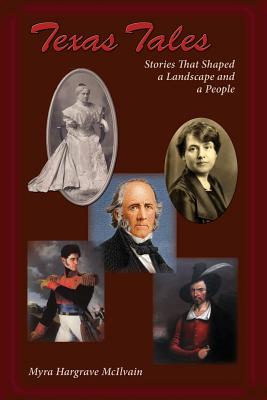 By Myra Hargrave McIlvain
$22.95
On Our Shelves Now

These tales trace the Texas story, from Cabeza de Vaca who trekked barefoot across the country recording the first accounts of Indian life, to impresarios like Stephen F. Austin and Don Mart n DeLe n who brought settlers into Mexican Texas. There are visionaries like Padre Jos Nicol's Ball , the Singer family, and Sam Robertson, who tried and failed to develop Padre Island into the wonderland that it is today. There are legendary characters like Sally Skull who had five husbands and may have killed some of them, and Josiah Wilbarger who was scalped and lived another ten years to tell about it. Also included are the stories of Shanghai Pierce, cattleman extraordinaire, who had no qualms about rounding up other folks' calves, and Tol Barret who drilled Texas' first oil well over thirty years before Spindletop changed the world. The Sanctified Sisters got rich running a commune for women, and millionaire oilman Edgar B. Davis gave away his money as fast as he made it. Sam Houston, Jean Lafitte, Antonio L pez de Santa Anna, Lucy Kidd-Key, Minnie Fisher Cunningham, all these characters and many more-early-day adventurers, Civil War heroes, and latter-day artists and musicians-created the patchwork called Texas.