Woman with a Blue Pencil (Paperback) 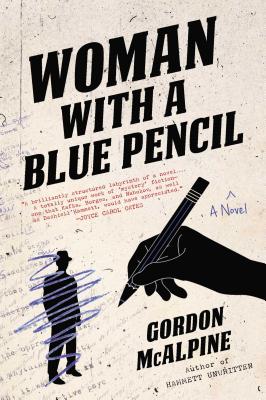 “Woman with a Blue Pencil is a brilliantly structured labyrinth of a novel—something of an enigma wrapped in a mystery, postmodernist in its experimental bravado and yet satisfyingly well-grounded in the Los Angeles of its World War II era. Gordon McAlpine has imagined a totally unique work of ‘mystery’ fiction—one that Kafka, Borges, and Nabokov, as well as Dashiell Hammett, would have appreciated.” —JOYCE CAROL OATES What becomes of a character cut from a writer’s working manuscript? On the eve of Pearl Harbor, Sam Sumida, a Japanese-American academic, has been thrust into the role of amateur P.I., investigating his wife’s murder, which has been largely ignored by the LAPD. Grief stricken by her loss, disoriented by his ill-prepared change of occupation, the worst is yet to come, Sam discovers that, inexplicably, he has become not only unrecognizable to his former acquaintances but that all signs of his existence (including even the murder he’s investigating) have been erased. Unaware that he is a discarded, fictional creation, he resumes his investigation in a world now characterized not only by his own sense of isolation but by wartime fear. Meantime, Sam’s story is interspersed with chapters from a pulp spy novel that features an L.A.-based Korean P.I. with jingoistic and anti-Japanese, post December 7th attitudes – the revised, politically and commercially viable character for whom Sumida has been excised. Behind it all is the ambitious, 20-year-old Nisei author who has made the changes, despite the relocation of himself and his family to a Japanese internment camp. And, looming above, is his book editor in New York, who serves as both muse and manipulator to the young author—the woman with the blue pencil, a new kind of femme fatale.

Gordon McAlpine is the author of Hammett Unwritten and numerous other novels, as well as a middle-grade trilogy, The Misadventures of Edgar and Allan Poe. Additionally, he is coauthor of the nonfiction book The Way of Baseball, Finding Stillness at 95 MPH. He has taught creative writing and literature at U.C. Irvine, U.C.L.A., and Chapman University. He lives with his wife Julie in Southern California.

“Woman with a Blue Pencil is a brilliantly structured labyrinth of a novel—something of an enigma wrapped in a mystery, postmodernist in its experimental bravado and yet satisfyingly well-grounded in the Los Angeles of its World War II era. Gordon McAlpine has imagined a totally unique work of ‘mystery’ fiction—one that Kafka, Borges, and Nabokov, as well as Dashiell Hammett, would have appreciated.”

“The tragic treatment of Japanese Americans during World War II is illuminated in a new way in Gordon McAlpine’s stylistic and effective novel investigating the erasure of identity. The novel’s structure itself is a perfect metaphor for the confusion and repression of the times and how people with ‘blue pencils’ seek to edit the representation of historic experiences. This is a brilliant novel that you will want to read over and over again.”

"Hammett Unwritten tells a story but raises questions about the nature of fiction and those who create it that will stay with you long after you finish the book." --Gumshoe Review

“Nearly perfect. . . . [An] inspired tale that delivers as expertly drawn meta-fiction and a compelling mystery.” —Reviewing the Evidence

“[A] literary conceit-within-a-conceit-within-another-conceit, and it succeeds very well. Readers who prefer to just focus on the story at hand will be rewarded with an exciting tale . . . and those who enjoy literary games-playing will have fun sorting it all out." —Booklist

“An enticing tale of fact and fiction.” —Suspense Magazine

“This fun metabiography takes the characters and general background of The Maltese Falcon and combines it with just enough fact to generate an entertaining tale.” —Monsters and Critics