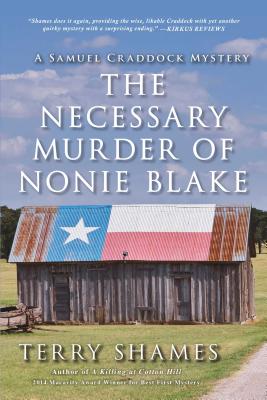 This is book number 5 in the Samuel Craddock Mysteries series.

Nonie Blake is back home from a mental institution where she has spent the last twenty years, and people are worried. Maybe too worried, for within a week of her return, Nonie is murdered. Police Chief Samuel Craddock thinks the only possible suspects are members of her tight-lipped family. Ever since Nonie tried to kill her sister when she was fourteen and was sent away to the institution, the family has kept to itself. Clues are scarce and Craddock is stumped. So he checks with therapists at the mental hospital to see whether they can add anything useful to his investigation. But he discovers that she has not been there for ten years. Now Craddock has to find out where Nonie has been all this time. Soon Craddock finds himself dealing not only with murder, but layers of deception and secrets, and in the midst of it all—a new deputy, one Maria Trevino, sent by the sheriff to beef up security in the small town of Jarrett Creek.

“In small towns, secrets won't stay buried and the past is never dead. But murder, however necessary it might seem, is still against the law. The Necessary Murder of Nonie Blake is another fine outing for police chief Samuel Craddock, with all the finely observed details of small-town life and quirky characters that readers have come to expect in the novels of Terry Shames, and it’s sure to win her even more fans.”

PRAISE FOR THE SAMUEL CRADDOCK MYSTERIES

"An amazing read. The poetic, literary quality of the writing draws you into a small town and its interesting, secret-carrying residents."
—RT Book Reviews

“Shames has come up with a sleuth for the long haul.”
—Toronto Star