Police at the Station and They Don't Look Friendly: A Detective Sean Duffy Novel (Paperback) 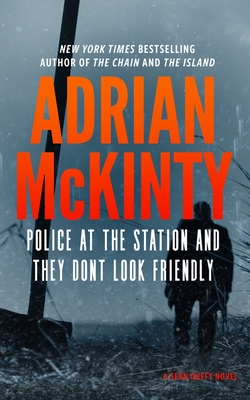 By Adrian McKinty
Email or call for price
Hard to Find

This is book number 6 in the Detective Sean Duffy series.

A BOSTON GLOBE BEST BOOK OF 2017! Shortlisted for the Anthony, Ned Kelly, and Edgar® Awards! Belfast 1988: A man is found dead, killed with a bolt from a crossbow in front of his house. This is no hunting accident. But uncovering who is responsible for the murder will take Detective Sean Duffy down his most dangerous road yet, a road that leads to a lonely clearing on a high bog where three masked gunmen will force Duffy to dig his own grave. Hunted by forces unknown, threatened by Internal Affairs, and with his relationship on the rocks, Duffy will need all his wits to get out of this investigation in one piece.

Adrian McKinty is the author of eighteen novels, including the acclaimed Detective Sean Duffy novels. Rain Dogs was the winner of the 2017 Edgar® Award and the Barry Award for Best Paperback Original. Gun Street Girl was shortlisted for the Anthony, Ned Kelly, and Edgar® Awards. The Cold Cold Ground won the Spinetingler Award. I Hear the Sirens in the Street won the Barry Award and was shortlisted for the Ned Kelly Award. In the Morning I'll Be Gone won the Ned Kelly Award and was selected by the American Library Association as one of the top-10 crime fiction novels of 2014. McKinty is also the author of the standalone historical The Sun Is God. Born and raised in Carrickfergus, Northern Ireland, McKinty was called "the best of the new generation of Irish crime novelists" in the Glasgow Herald.

THE DETECTIVE SEAN DUFFY NOVELS HAVE WON SPINETINGLER, BARRY, AND NED KELLY AWARDS AND HAVE BEEN SHORTLISTED FOR THE EDGAR, ANTHONY, CWA IAN FLEMING, AND THEAKSTON AWARDS.

“McKinty is one of the great storytellers writing crime fiction today.”

"McKinty is one of Britain's great contemporary crime writers and the Sean Duffy books are his masterpiece."

– IAN RANKIN, New York Times-bestselling author of Rather Be the Devil

“This is the sixth novel in the series.... For readers who have not shared in the rapture, there is no time like the present to join…. A must read for fans of Stuart Neville and Celtic noir.”

"McKinty continues to astound .... [His] novels are, in my mind, already elevated to canonical status.... McKinty takes the time-tested conventions of the mystery genre and builds a narrative utterly unique and compelling over them.... In short, McKinty has learned from the masters, and in my opinion, now is one."

"Mixes a mordant wit and casual, unpredictable violence that vividly portrays a turbulent time.... McKinty is in full command of language, plot, and setting in a terrifying period of history that sometimes seems forgotten. Fans of gritty Northern Irish crime writers such as Stuart Neville, Declan Hughes, and Brian McGilloway will enjoy this talented author."

"Remarkably clever.... Written in a darkly funny, laconic style... riveting. The noir ambiance is irresistible, and the Belfast setting is disturbingly vivid.... Sure to inspire readers to go back and catch up on more of McKinty's superb writing.... An excellent noir thriller."