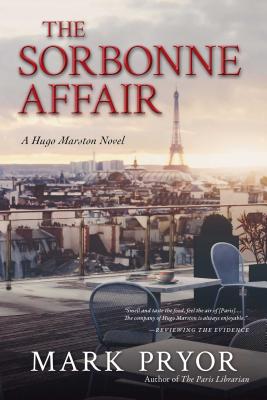 This is book number 7 in the Hugo Marston series.

Someone is spying on American author Helen Hancock. While in Paris to conduct research and teach a small class of writers, she discovers a spy camera hidden in her room at the Sorbonne Hotel. She notifies the US Embassy, and former FBI profiler Hugo Marston is dispatched to investigate. Almost immediately, the stakes are raised from surveillance to murder when the hotel employee who appears to be responsible for bugging Hancock’s suite is found dead. The next day, a salacious video clip explodes across the Internet, showing the author in the embrace of one of her writing students—both are naked, and nothing is left to the imagination. As more bodies pile up, the list of suspects narrows; but everyone at the Sorbonne Hotel has something to hide, and no one is being fully honest with Hugo. He teams up with Lieutenant Camille Lerens to solve the case, but a close call on the streets of Paris proves that he could be the killer’s next target.

Mark Pryor is the author of the Hugo Marston novels The Bookseller, The Crypt Thief, The Blood Promise, The Button Man, The Reluctant Matador, and The Paris Librarian, as well as the novels Hollow Man and the forthcoming Dominic. He has also published the true-crime book As She Lay Sleeping. A native of Hertfordshire, England, he is an assistant district attorney in Austin, Texas, where he lives with his wife and three children.

“The flawlessly constructed whodunit sharply contrasts with the gritty flashbacks to Hugh’s past, a subplot that rewards series fans with a new layer of depth to the central characters.”

"Entertaining. . . . A fascinating cast, an intriguing subplot that delves into Hugo’s past, and a gorgeous Parisian setting add to the story’s appeal."

“Seriously good reading…Paris fans will love the descriptions of the city, recognize favourite places and feel they can see the scenes as the story unfolds…The plot is deftly weaved, intelligent and fast paced and this modern day Sherlock Holmes – think Jack Reacher if he was cultured – isn’t perfect a perfect hero, but you’d definitely want him on your side. Clever, sharp, appealing Hugo Marston – a terrific character and a great read.”

“Pryor is an expert at characterization… Equally alive are the Paris locations; to read the book is to smell and taste the food, feel the air of the city, and hear the language… Spending a couple of hours in the company of Hugo Marston is always enjoyable, and reading The Paris Librarian was no exception.”

― Oprah.com (on The Bookseller)

"Mark Pryor is one of the best new voices in crime fiction; and Hugo Marston, one of the most appealing detectives to come along in years."

“Sure to appeal to mystery lovers, book collectors, and Francophiles alike, The Paris Librarian is an welcome addition to an enjoyable series.”

“Those who love Paris and environs will thrill to the setting, which is ably and lovingly evoked….Marston is a well-drawn and engaging character…”

“The sixth Hugo Marston novel has it all: a Paris setting, a locked-room death that may or may not be murder, a beautiful actress who was a spy for the French resistance during the Second World War and a dead Nazi…Marston follows the clues in a finely structured plot that’s one of Pryor’s best books yet.”