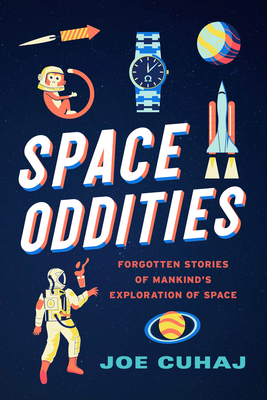 Nothing captivates the human imagination like the vast unknowns of space. Ancient petroglyphs present renderings of the heavens, proof that we have been gazing up at the stars with wonder for thousands of years. Since then, mankind has systematically expanded our cosmic possibilities. What were once flights of fancy and dreams of science fiction writers have become nearly routine - a continuous human presence orbiting the Earth, probes flying beyond our solar system, and men walking on the moon. NASA and the Russian space program make traveling to the stars look easy, but it has been far from that. Space travel is a sometimes heroic, sometimes humorous, and always dangerous journey fraught with perils around every corner that most of us have never heard of or have long since forgotten. Space Oddities brings these unknown, offbeat, and obscure stories of space to life. From the showmanship and bravado of the earliest known space fatality, German Max Valier, to the first ever indictment under the Espionage Act on an Army officer who leaked secrets concerning the development of early U.S. rockets; and the story of a single loose bolt that defeated the Soviet Union's attempt to beat America to the moon. Author Joe Cuhaj also sheds light on the human aspects of space travel that have remained industry secrets - until now: how the tradition of using a musical playlist to wake astronauts up began, fascinating tales about inventions like the Fischer Space Pen, Omega watches, and even Tang breakfast drink. In addition to fun and entertaining space trivia, Space Oddities also features stories of the profound impact that space travel has had on challenges right here at home, like the effort by civil rights leaders and activists in the 1960s to bring the money from the space program back home to those in need on Earth; NASA's FLATs (First Lady Astronaut Training) program and the 13 women who were selected to become astronauts in 1960, but were denied a chance at flying even after successfully completing the rigorous astronaut training program; and, the animals who many times sacrificed their lives to prove that man could fly in space. Filled with rare and little-known stories, Space Oddities will bring the final frontier to the homes of diehard space readers and armchair astronauts alike.

Joe Cuhaj grew up in New Jersey as a space fanatic. He would skip school to watch every launch and recovery from the late Mercury missions to the final Skylab mission all while building and flying model rockets. Cuhaj is a Navy veteran and former radio broadcaster turned author and freelance writer. He began his radio career just outside of New York City but moved to Mobile, Alabama in 1981 with his wife who is from the Port City. During this time, Cuhaj worked in various positions including news director / reporter where he applied to take part in NASA's Journalist in Space program, but he never heard back. He is the author of eight books, including the forthcoming Hiking Waterfalls Alabama.