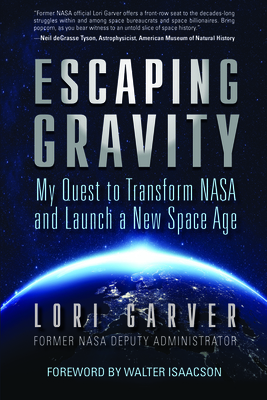 "Former NASA official Lori Garver offers a front-row seat to the decades-long struggles within and among space bureaucrats and space billionaires. Bring popcorn, as you bear witness to an untold slice of space history."--Neil deGrasse Tyson, Astrophysicist and author of Space Chronicles: Facing the Ultimate FrontierHow Lori Garver's Battle Against the Greed and Corruption of the US Space Program Revolutionized NASA and Ushered in the New Space Age Escaping Gravity is former NASA Deputy Administrator Lori Garver's firsthand account of how a handful of revolutionaries overcame the political patronage and bureaucracy that threatened the space agency. The success of Elon Musk's SpaceX, Jeff Bezos' Blue Origin, Richard Branson's Virgin Galactic, and countless other commercial space efforts were preceded by decades of work by a group of people Garver calls "space pirates." Their quest to transform NASA put Garver in the crosshairs of Congress, the aerospace industry, and hero-astronauts trying to protect their own profits and mythology within a system that had held power since the 1950s.As the head of the NASA transition team for President-elect Barack Obama and second-in-command of the agency, Garver drove policies and funding that enabled commercial competition just as the capabilities and resources of the private sector began to mature. She was determined to deliver more valuable programs, which required breaking the self-interested space-industrial cycle that, like the military, preferred to spend billions of taxpayer dollars on programs aimed to sustain jobs and contracts in key congressional districts. The result: more efficiency and greater progress.Including insider NASA conversations and insights on how the US space industry has been transformed to become the envy of the world and is ushering in a new space age, Escaping Gravity offers a blueprint for how to drive productive and meaningful change.