History of Cambodia: A Captivating Guide to Cambodian History, Including Events Such as the Rise and Decline of the Khmer Empire, Siege of (Paperback) 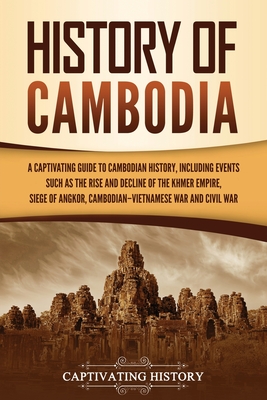 If you want to discover the captivating history of Cambodia, then keep reading...

Did you know that Cambodia is home to Angkor Wat, the world's largest religious building?

In 2009, a Cambodian historian took several walking tours of the war-ravaged country. He took photos, and one shows a discarded broken Buddhist statue lying in the green grasses beneath his feet. The artifact possibly dates back to the 1st century CE. Yet it lay there abandoned, instead of being housed in an honored place inside a glass cabinet in a museum. Scholars bemoan the fact that the deeds and even the names of Cambodian kings from its early times have faded like ghosts into the ethereal world of unwritten history.

However, what is ensconced in glass cabinets in Cambodian museums are the many skulls of those who were executed by one of the most brutal regimes in the history of the world. Cambodia, or, as it was once known, Kampuchea, is a beautiful country, replete with an incredibly wondrous system of canals. But its history has been marked by the Khmer Rouge and Pol Pot, which brought the nation to its knees. Although it has risen from the ashes of genocide, it is still facing a major crisis today.

Travel back in time to learn about Cambodia's past, one that was greatly influenced by various religions. For centuries, their beleaguered country was the battleground of many countries other than their own, and during the 20th century, their own men turned on each other.

In this book, you will discover:

Don't miss this opportunity to learn about the History of Cambodia. Scroll up and click the "add to cart" button today