The Romance of Reality: How the Universe Organizes Itself to Create Life, Consciousness, and Cosmic Complexity (Hardcover) 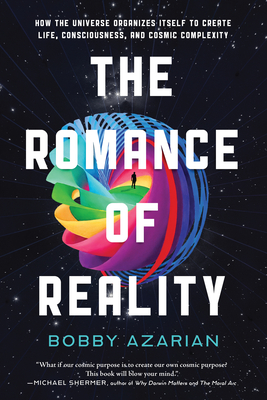 Why do we exist? For centuries, this question was the sole province of religion and philosophy. But now science is ready to take a seat at the table.

According to the prevailing scientific paradigm, the universe tends toward randomness; it functions according to laws without purpose, and the emergence of life is an accident devoid of meaning.

But this bleak interpretation of nature is currently being challenged by cutting-edge findings at the intersection of physics, biology, neuroscience, and information theory—generally referred to as “complexity science.” Thanks to a new understanding of evolution, as well as recent advances in our understanding of the phenomenon known as emergence, a new cosmic narrative is taking shape: Nature’s simplest “parts” come together to form ever-greater “wholes” in a process that has no end in sight.

In The Romance of Reality, cognitive neuroscientist Bobby Azarian explains the science behind this new view of reality and explores what it means for all of us. In engaging, accessible prose, Azarian outlines the fundamental misunderstanding of thermodynamics at the heart of the old assumptions about the universe’s evolution, and shows us the evidence that suggests that the universe is a “self-organizing” system, one that is moving toward increasing complexity and awareness.

Cosmologist and science communicator Carl Sagan once said of humanity that “we are a way for the cosmos to know itself.” The Romance of Reality shows that this poetic statement in fact rests on a scientific foundation and gives us a new way to know the cosmos, along with a riveting vision of life that imbues existence with meaning—nothing supernatural required.

Bobby Azarian is a science journalist and a cognitive neuroscientist with a PhD from George Mason University. He has written for publications including The Atlantic, The New York Times, BBC, Scientific American, Slate, HuffPost, Quartz, and Aeon. His research has been published in peer-reviewed journals such as Human Brain Mapping, Cognition & Emotion, Acta Pychologica, and Philosophical Transactions of the Royal Society. His blog “Mind in the Machine,” hosted by Psychology Today, has received over 8 million views. Azarian worked on Season 2 of the YouTube Premium psychology-based series Mind Field (as a consultant and researcher), which helped the show win its first Emmy nomination. He has appeared on The Joe Rogan Experience, The Michael Shermer Show, The David Pakman Show, and The Young Turks to discuss his work. He is based in Arlington, Virginia.