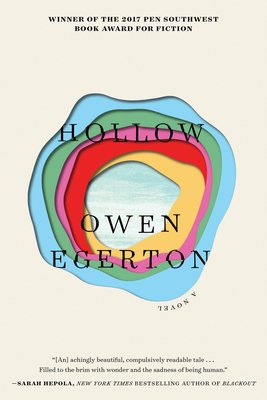 An NPR Best Book of the Year, Hollow is the story of a professor whose life is unended after an unspeakable tragedy.
When Oliver Bonds, a revered religious studies professor at the University of Texas, loses his toddler son and undergoes intense legal scrutiny over his involvement, grief engulfs him completely. His life as he knows it is over; Oliver loses his wife, home, and faith. Three years after his son's death, Oliver lives in a shack without electricity and frequents the soup kitchen where he used to volunteer. It's only when befriended by Lyle, a con artist with a passion for theories of Hollow Earth, that Oliver begins to reengage with the world. Oliver too becomes convinced that the inside of the planet might contain a different realm. Desperate to find a place where he can escape his past, Oliver chases after the most unlikely of miracles. With unforgettable characters, wild imagery, and dark humor, Hollow explores the depths of doubt and hope, stretching past grief and into the space where we truly begin to heal. With the kind of grace not usually seen in accessible modern fiction, Egerton also invokes many other things with this central metaphor . . . Ollie's voice is one of the most believable I've encountered this year, sustained by honesty, realism, and compassion. In his exile, Ollie has taken stock. His reckoning with the past creates the story's exquisite tension and makes the final scene bloom with tenderness . . . The core of Hollow is anything but. --NPR

Owen Egerton is one of the talents behind the award-winning The Sinus Show and Master Pancake Theater at the Alamo Drafthouse Theater, and for several years was the artistic director of Austin's National Comedy Theatre. He's written screenplays for Fox, Warner Brothers and Disney studios. He is also the author of the one-man play The Other Side of Sleep and the novel The Book of Harold, which is currently in development as a television series with Warner Bros. Television. He lives in Austin.