The Future of Science Is Female: The Brilliant Minds Shaping the 21st Century (Gift for Teenage Girls 13-15) (Hardcover) 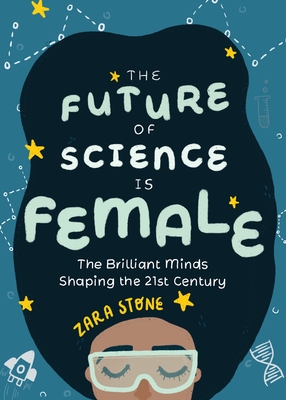 Women Scientists and Entrepreneurs You Should Know

"A book that is sure to inspire a new generation of girls in STEM. Educational and inspiring " ─ Felicia Day, New York Times bestseller, American actress, gamer, writer, web series creator, and queen of the geeks.

#1 New Release in Teen & Young Adult Inventions and History of Science and Biographies.

From saving the oceans to improving the rehabilitation and job prospects of people struggling in prison, these badass female scientists and entrepreneurs are changing the world.

Take a look at what the future holds--and how women are making it better. In The Future of Science is Female, author and award-winning journalist Zara Stone shares the fascinating, complicated stories of how a diverse group of powerful women got started--from the perspective of those still working it out as they go along. Take 22-year old Dominique Barnes, a female hero of the oceans. She was worried about all the dolphins and whales killed during shrimp farming, so the marine biologist created a tasty, affordable plant-based shrimp alternative. And she's just one of the sheroes you will discover in The Future of Science is Female.

Real encouragement and inspiration for today's amazing girls. Forget the "ivory tower" of accomplishment. Learn about the drama, tears, and adventures everyday women heroes face as they race to fix everything the world has messed up. The Future of Science is Female inspires future female founders of the world to turn their dreams into reality.

Readers of inspiring books about strong women like The Book of Awesome Women, Galaxy Girls, and Girls Who Run the World will love The Future of Science is Female. Inside also learn about: