Footsteps of Federer: A Fan's Pilgrimage Across 7 Swiss Cantons in 10 Acts (Paperback) 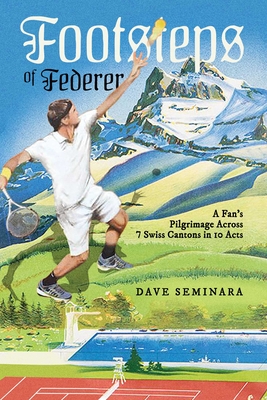 A writer and tennis player seeks insights and inspiration by traveling across Switzerland in the footsteps of Roger Federer.

Roger Federer could live anywhere in the world, but he always returns to the place he loves most: Switzerland. Dave Seminara is a mad traveler and tennis lifer who has written about Federer for The New York Times and other publications. A pair of autoimmune diseases and a knee surgery kept Dave from playing tennis for years, but as he inched toward recovery, he had a bright idea: why not start his tennis comeback on hallowed ground—courts that his hero Roger Federer graced in Switzerland.

Footsteps of Federer is a funny, novella-length account of Seminara’s travels across seven Swiss cantons in search of insights into Federer’s character, which is inextricably linked to his deep roots in, and love for, his country. Seminara timed his unique pilgrimage to the 2019 Swiss Indoors, where he had a chance to ask Roger a number of offbeat questions before and after Federer hoisted his record tenth title there. Seminara’s Federer pilgrimage took him to Switzerland’s most important abbey, where he prayed with Abbot Urban Federer; to the vineyard of Jakob Federer from Berneck, where the Federer clan originated from; to the stunning villa where Roger and Mirka were married; and to many of the neighborhoods and tennis clubs where Roger has lived and trained at over the years.

Dave Seminara is a writer, former diplomat, and passionate tennis fan who lives in St. Petersburg, Florida. His writing has appeared in The New York Times, which first published a brief account of this journey, The Wall Street Journal, BBC, The Washington Post, and dozens of other publications. He is the author of two international bestsellers: Bed, Breakfast & Drunken Threats: Dispatches from the Margins of Europe and Breakfast with Polygamists: Dispatches from the Margins of The Americas. For more information, visit www.daveseminara.com.

“Footsteps of Federer is a brilliant book, a creative idea, a travelogue, a why-tennis-matters manifesto, a thoughtful essay on Roger Federer, and a personal story of why things matter to us and what matters most. Stay for the goosebumps-inducing end.” –Greg Bishop, Sports Illustrated

"The crux of this story is one writer's devotion to the most beloved tennis athlete in history. To me it was also a beautiful trip down memory lane. I played in the German Bundesliga for years after retiring from the tour and Dave's description of the little tennis clubs he visited on his journey captures the joy of post match dinners and draft beer that I remember so fondly." –Cliff Drysdale, Hall of Fame tennis player and ESPN broadcaster

"With a fascinating mixture of intimacy, perspective and humour, Seminara shows on this Swiss pilgrimage why Roger loves his country so much and in what special way his rather reserved compatriots return this love. A pleasure to read, even for Federer and Switzerland connoisseurs." –Rene Stauffer, author of Federer: The Biography


"A charming new book about all things Federer that concludes with a plot twist worthy of one of Hercule Poirot’s drawing-room denouement." –Simon Briggs, Daily Telegraph

"Author and journalist Dave Seminara set out on a quest to understand Roger Federer, his tennis hero, by visiting various regions, or cantons, in Switzerland where Roger grew up, got married, played, vacationed, or just hung out. The result is the charming and delightful Footsteps of Federer, an absolute must for tennis fans frustrated by the pandemic’s limiting of their ability to attend matches in person and see King Roger in the flesh." –Michael Levin, New York Times bestselling author

"You would think that everything has already been written about Roger Federer, the greatest tennis player of all time. But Seminara's redemptive travels around Switzerland introduce us to sights, courts, and characters that reveal new layers to the Federer story.  His sense of humor, love of tennis, and willingness to ask anyone anything make Seminara's pilgrimage a fun ride you'll want to take." –Megan Fernandez, Indianapolis Monthly

"A great new book that...gets to the heart of the Swiss soul." –Diccon Bewes, author of Swiss Watching