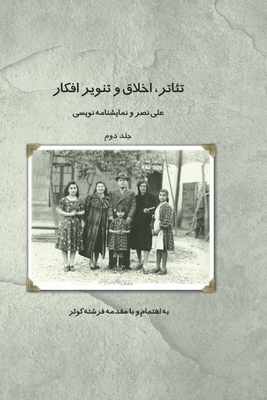 Based on Sayyid Ali Nasr's (1895- 1961) memoirs and plays, the author has written an extensive introduction to this two-volume collection of Nasr's original and adapted plays. Ali Nasr was, and still is, known by many as "The Father of Iranian Theatre" (Perdar e Teatr e Iran). He was the founder of the first Drama School in Iran (Honarestan e Honarpishegi). Nasr believed that drama was the best tool for advancement and enlightenment of society. He was particularly fond of the French classic playwrights, such as Moliere. During the Reza Shah period, he held many official responsibilities including the head of theatre section of the Organization for Intellectual Development (Sazman e Parvaresh e Afkar), established by Reza Shah. These two volumes contain 24 of the plays that best represent his ideology and style of writing, translating, and adapting. This collection also contains documents and photographs, both personal and professional.

Fereshteh Kowssar, an author and educator, taught Persian at Yale before her retirement. She has published three books both in the US and Iran, one of which, "Bidad e Sokoot" ("Outrage of Silence"), received an award from the Isfahan Literary Competition in 2005. She is a grandchild of Sayyid Ali Nasr.