Reign the Earth (The Elementae) (Hardcover) 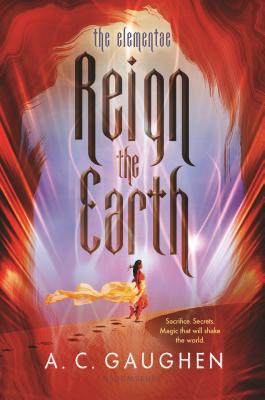 With powerful magic that manipulates the natural world, dangerously cunning royalty, and heart-stopping romance, this new sweeping fantasy series is perfect for fans of Sabaa Tahir.

"Another fantasy romance in the vein of books by Sabaa Tahir, Renee Ahdieh. . . . Shalia matures from a frightened girl in a foreign land to a woman unwilling to allow her destiny or desires to be controlled by the men around her." - School Library Journal

"I will be thinking about Shalia's strength and fearlessness (and swooning over the slow-burn romance) as I anxiously await book two!" - Erin Bowman, author of Vengeance Road

Shalia is a proud daughter of the desert, but after years of devastating war with the adjoining kingdom, her people are desperate for an end to the violence that has claimed so many of their loved ones. Willing to trade her freedom to ensure the safety of her family, Shalia becomes Queen of the Bone Lands, a country where magic is outlawed and the Elementae--those that can control earth, air, fire and water--are traitors, subject to torture . . . or worse.

Before she is even crowned, Shalia discovers that she can bend the earth to her will. Trapped between her husband's irrational hatred of the Elementae and a dangerous rebellion led by her own brother, Shalia must harness her power and make an impossible choice: save her family, save the Elementae, or save herself.

A. C. Gaughen is a freelance writer and regular blogger who has had several stories published in the Chicken Soup for the Soul series. She attended college in Scotland but now lives in Massachusetts, USA.

"A series opener with depth. . . .Gaughen delivers an emotionally resonant tale full of magic so powerful it can move the earth; rich writing and worldbuilding will appeal to readers seeking complex characters, palace intrigue, and weighty questions of power and loyalty." - Publishers Weekly

"A tale of staggering magic, cutthroat royalty, and lethal intrigue. . . . Gaughen weaves a compelling feminist fantasy. Shalia is a refreshingly strong heroine with a voice that leaps off the page. Her story will both break readers’ hearts and urge them onward, anxious to know how Shalia grapples with her destiny." - Booklist

"Another fantasy romance in the vein of books by Sabaa Tahir, Renee Ahdieh, and Sarah Maas, this volume will have teens clamoring for a sequel. Shaila matures from a frightened girl in a foreign land to a woman unwilling to allow her destiny or desires to be controlled by the men around her." - School Library Journal

"Shalia’s story unfolds slowly, smoldering before it rages into an enormous fire. It builds in a powerful way, drawing the reader into a larger plot than they ever expected. . . . Reign the Earth is sure to inspire a dedicated fan base eager for the next tale." - Foreword Reviews

"The romance between Shalia and Galen is absolutely swoonworthy, but it’s a relationship of equals with Shalia demanding a partner rather than a protector. Fans of Chokshi’s The Star-Touched Queen . . . will appreciate Shalia’s confidence, sense of agency, and ultimate defiance of Calix and his reign." - BCCB

"With a clever, strong-willed heroine, a downright terrifying villain, and complex relationships that leap off the page, Reign the Earth is the feminist fantasy I didn't know I needed. I will be thinking about Shalia's strength and fearlessness (and swooning over the slow-burn romance) as I anxiously await book two!" - Erin Bowman, author of VENGEANCE ROAD

"Scarlet is a worthy protagonist for adolescent female readers, and [the] nonstop action that peppers the plot will entice male teens with a penchant for semihistorical fiction." - VOYA on LION HEART

"Filled with action, suspense, and a healthy dash of passionate but controlled romance." - School Library Journal on LADY THIEF

"Debut novelist Gaughen does more than offer a rip-roaring tale, though it is that. The story, told in Scar's distinctive first-person voice, captivates and gets readers as deeply into the heart of a troubled girl. . . has plenty for both the romantic and the adventure lover." - starred review, Booklist on SCARLET

"Plenty of swashbuckling adventure and a hearty dose of romance power this re-imagining of the legend of Robin Hood." - School Library Journal on SCARLET