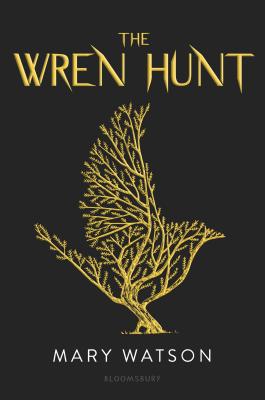 Thrilling, atmospheric, and filled with ancient magic, this lyrically written YA debut is perfect for readers of The Raven Cycle and Wink Poppy Midnight.

Once a year, Wren is chased through the woods near her rural Ireland hometown in a warped version of a childhood game. Her pursuers belong to the judges, a group in control of an ancient, powerful magic they stole from her own people, the augurs . . . but they know nothing of her real identity. If they learned the truth, the game would surely turn deadly.

Though she knows the risks, Wren also goes on the hunt, taking a dangerous undercover assignment as an intern at enemy headquarters, the Harkness Foundation. If she can uncover a long-buried secret, she can save her family and end the judges' reign once and for all.

But as the web of lies, deceit, and betrayal thickens around Wren, she hurtles toward a truth that threatens to consume her and reveal who she really is. Not only has she come to the attention of powerful judge Cassa Harkness, but she is also falling dangerously in love with the one person she shouldn't. And she may need to decide which she'd rather lose, her heart or her life.
This spellbinding YA debut from Mary Watson is part thriller, part love story and entirely captivating.

Mary Watson grew up in Cape Town, South Africa, where she worked as an art museum guide, library assistant, actress in children's musicals, front-of-house duty manager, and university lecturer. She now lives on the west coast of Ireland with her husband and three young children. After publishing a short story collection and novel for adults, she fell in love with the brave girls in YA books, which inspired her to write her debut novel for teens, The Wren Hunt.

"Watson’s core characters . . . enchant. Calista is a nuanced, sympathetic antagonist; Wren’s struggles between love and duty, fate and free will are transfixing; and Wren and Tarquin’s forbidden romance feels at once modern and folkloric." - Publishers Weekly

“The mythology introduced in this debut is lovely and haunting . . . [For] readers who loved the dark lore and lyrical language of Melissa Albert's The Hazel Wood.” —Booklist

“In this moody magical thriller, a girl with a secret identity and a talent that doubles as a curse has to outwit her enemies, survive her own damaging power, and follow her heart. For fans of . . . [t]he Shannara Chronicles.” —Buzzfeed

“Wren's a feisty but vulnerable hero . . . Readers who enjoy the mix of modernity and mythology of Stiefvater's The Raven Cycle will find that same blend here.” —BCCB

“[A] compelling take on druid mythology combined with a dash of family mystery. . . . The novel asks how knowledge not only defines but also changes someone, engendering interesting surprises.” —Foreword Reviews

“This book will be a great read for those who enjoy fantasy, romance, and a little bit of mystery.” —School Library Connection

“The Wren Hunt rings with ancient, subtle magic, masterfully transmuted into words. A tale that gets into your bones.” —Samantha Shannon, New York Times bestselling author of THE BONE SEASON