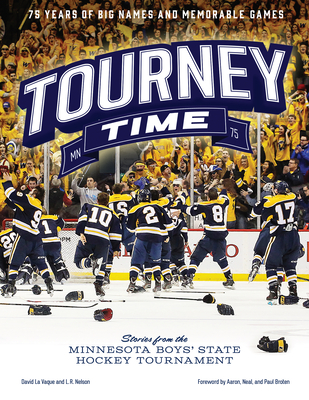 Seventy-five years of big names and memorable games--chronicling the highs and lows, the memories, and the legends from the Minnesota boys' state high school tournament.

David La Vaque is a reporter for the Star Tribune and has been the newspaper's point person for high school hockey since 2010. He has covered the state tournament in its entirety each year, writing enterprise pieces on the sport and selecting the paper's All-Metro teams and Metro Player of the Year. A graduate of the University of Minnesota, he covered sports for the Minnesota Daily and his work has also appeared in such media as Athlon Sports Magazine, Atlanta Journal-Constitution, CSN-Chicago, Duluth News Tribune, Miami Herald, Cleveland Plain Dealer, USA Junior Hockey Magazine, and US College Hockey Online Magazine, among others. He lives in Woodbury, Minnesota. Loren Nelson is an author, freelance journalist, and photographer and the founder and president of Legacy.Hockey, Minnesota's number one resource for high school hockey's past, present, and future. A recipient of numerous state, regional, and national writing awards, he researched, wrote, and published a series on Minnesota's top 100 high school players as managing editor of the Minnesota Hockey Hub. He covered Stanley Cup runs as a beat writer for the Tampa Bay Lightning and Anaheim Ducks, and he has covered multiple Super Bowls, college football national championship games, golf major championships, and the World Series. Nelson lives in Excelsior, Minnesota.