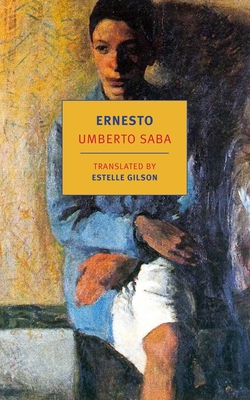 A coming of age story that is a classic of gay literature, now in English for the first time

Ernesto is a classic of gay literature, a tender and complex tale of sexual awakening by one of Italy’s most admired poets. Ernesto is a sixteen-year-old boy from an educated family who lives with his mother in Trieste. His mother is eager for him to get ahead and has asked a local businessman to give him some workplace experience in his warehouse. One day a workingman makes advances to Ernesto, who responds with willing curiosity. A month of trysts ensues before the boy begins to tire of the relationship, finally escaping it altogether by engineering his own dismissal. And yet his experience has changed him, and as Umberto Saba’s unfinished, autobiographical story breaks off, Ernesto has struck up a new, oddly romantic attachment to a boy his own age.

Umberto Saba (1883–1957) was born Umberto Poli in the city of Trieste, then part of the Austro-Hungarian Empire, and continued to live in Trieste for the greater part of his life. The child of a broken family—his father, who had converted to Judaism to marry, soon abandoned his wife—Saba attended the Imperial Academy of Commerce and Navigation in Trieste, and then moved for some years to Pisa, where he studied classical languages and archaeology. In 1909 he married Carolina Wölfler, also Jewish, and the subsequent year she gave birth to a daughter; a first book of poems, published under the name of Umberto Saba, also appeared that year. Saba’s marriage was at first troubled—his wife’s affair with a painter led to a brief separation—and the couple was poor, and for a few years they moved around Italy in the hopes of improving their fortunes. After the end of World War I, however, Saba bought a secondhand bookshop in Trieste—he called it La Libreria Antica e Moderna—and in the next decades he made a comfortable living as a bookdealer while working on Il Canzoniere, the book of poems he published in 1921 and would go on adding to for the rest of his life. During World War II, Saba and his family were forced to flee Trieste and go into hiding in Florence to avoid deportation by the Nazis. Though the postwar years brought him many prizes and widespread recognition as one of modern Italy’s greatest poets, Saba suffered from depression, which had plagued him all his life, and opium addiction and was repeatedly institutionalized. He died at seventy-four, within a year of his wife.

Estelle Gilson is a writer, translator, and poet. Among her translations are works by Stendhal, Gabriel Preil, Natalia Ginzburg, Massimo Bontempelli, and Giacomo Debenedetti. Her translation of Stories and Recollections of Umberto Saba was awarded the MLA’s first Scaglione Prize for the best literary translation of the previous two years.

"This little miracle of a book tackles the weightiest themes—the unthinking cruelty of youth, the shock of adulthood, the humanizing force of love—with the humor and lightness of touch that are the surest sign of mastery. For all its modesty and charm, the novel’s profound, unassuming beauty has a force and finally a grandeur that come from the source of all great art, what Saba calls ‘the red hot center of life.’” — Garth Greenwell, author of What Belongs to You

“A work of tenderness that doesn’t smudge its complex corners.” —Anakana Schofield

“Umberto Saba’s secret novel Ernesto re-creates a boy’s awakening to sexual love with both men and women. It’s a story so fresh, so alive to nuances of feeling and perception, it defies any formulaic understanding of love in Saba’s time or in our own. Estelle Gilson’s translation catches the intimate rhythms of these discoveries.” —Rosanna Warren

"Even in an incomplete state, Ernesto has the limpid style and emotional power of a major literary work." —Benjamin Ivry, Forward

"One of the greatest modern Italian poets.... What sets Ernesto apart (and Saba’s prose) is the equanimity, the sparkling irony of the sensibility with which he greets this unexpected turn in his life...a lovely, bright, wise fragment that by comparison makes most other adolescent sex-memory fiction read like drying cement." —Kirkus Reviews

"From this skeletal account, one may derive the main elements of the story, and the key images and preoccupations, from which Saba would build his poems: the errant father, the lost paradise of Peppa’s house, the city of Trieste, the innocent and then tormented love for his wife, melancholy, solitude, and sexual desire, including some lightly sketched yearning for boys.... Saba inherited the mixture of Romantic plangency and Classical stoicism that gave his own work its peculiar timbre." —Rosanna Warren, The New Republic

"He saunters through every street of Trieste, catching glimpses of the city’s manifold forms of life; his sky holds a little cloud that has haunted him from childhood...a certain crisp exactitude.... Saba’s straightforward language, use of traditional forms and realism also have had an impact on the work of many of the leading Italian poets today." —Susan Stewart, The Nation