Things That Bother Me: Death, Freedom, the Self, Etc. (Paperback) 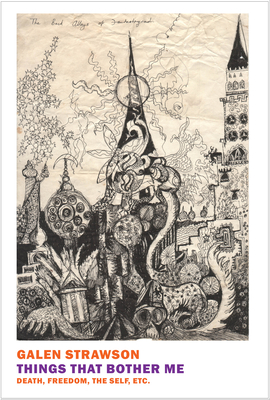 An original collection of lauded philosopher Galen Strawson's writings on the self and consciousness, naturalism and pan-psychism.

Galen Strawson might be described as the Montaigne of modern philosophers, endlessly curious, enormously erudite, unafraid of strange, difficult, and provocative propositions, and able to describe them clearly—in other words, he is a true essayist. Strawson also shares with Montaigne a particular fascination with the elastic and elusive nature of the self and of consciousness. Of the essays collected here, “A Fallacy of Our Age” (an inspiration for Vendela Vida’s novel Let the Northern Lights Erase Your Name) takes issue with the commencement-address cliché that life is a story. Strawson questions whether it is desirable or even meaningful to think about life that way. “The Sense of the Self” offers an alternative account, in part personal, of how a distinct sense of self is not at all incompatible with a sense of the self as discontinuous, leading Strawson to a position that he sees as in some ways Buddhist. “Real Naturalism” argues that a fully naturalist account of consciousness supports a belief in the immanence of consciousness in nature as a whole (also known as panpsychism), while in the final essay Strawson offers a vivid account of coming of age in the 1960s.

Drawing on literature and life as much as on philosophy, this is a book that prompts both argument and wonder.

Galen Strawson is a writer and professor of philosophy. He has published seven books of philosophy and is currently the President’s Chair in Philosophy at the University of Texas, Austin.

"Galen Strawson is one of the cleverest men alive." —Ian McEwan

“In this collection of essays, Strawson enables lay readers to see a philosopher at work….Strawson’s skill at argument, highly personal views, and immense learning make this book ideal for anyone interested in philosophy.  Comparable to Thomas Nagel’s The Last Word.” —Library Journal, starred review

"Galen Strawson’s Things That Bother Me is, despite its title, no collection of complaints. Rather, Strawson invokes the notion of being bothered in the largest sense, engaging with the ideas, or conditions of living, that will not leave him alone. He is that most unlikely of thinkers, the pragmatic philosopher…The book is accessible and intelligent, written for a diverse range of readers, engaged in both the author’s personality and his ideas.” —David Ulin, 4Columns

"I found Things That Bother Me captivating, not only for its philosophical insightfulness but also for its wit and pathos. Strawson, by not hiding behind the façade of the impersonal point of view, manages to draw a reader close, even while discussing some rather abstruse topics. It is a rare and wonderful philosopher who can make almost anybody be bothered by the things that bother him." —Rebecca Newberger Goldstein, author of Plato at the Googleplex: Why Philosophy Won’t Go Away

"Galen Strawson has a marvelous gift for untangling even the most complex lines in philosophical thinking and laying them straight. He writes with humor, clarity and always from a recognizably human place. Even the most complex and controversial areas in modern philosophy come into the light when you are in his benign company.... He opens windows and finds light-switches like no other philosopher writing today." —Stephen Fry