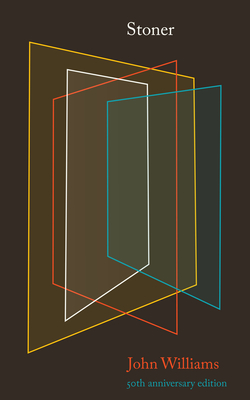 Discover an American masterpiece. This unassuming story about the life of a quiet English professor has earned the admiration of readers all over the globe.

William Stoner is born at the end of the nineteenth century into a dirt-poor Missouri farming family. Sent to the state university to study agronomy, he instead falls in love with English literature and embraces a scholar’s life, so different from the hardscrabble existence he has known. And yet as the years pass, Stoner encounters a succession of disappointments: marriage into a “proper” family estranges him from his parents; his career is stymied; his wife and daughter turn coldly away from him; a transforming experience of new love ends under threat of scandal. Driven ever deeper within himself, Stoner rediscovers the stoic silence of his forebears and confronts an essential solitude.

John Williams’s luminous and deeply moving novel is a work of quiet perfection. William Stoner emerges from it not only as an archetypal American, but as an unlikely existential hero, standing, like a figure in a painting by Edward Hopper, in stark relief against an unforgiving world.

John Williams (1922-1994) was born and raised in northeast Texas. Despite a talent for writing and acting, Williams flunked out of a local junior college after his first year. He reluctantly joined the war effort, enlisting in the Army Air Corps, and managing to write a draft of his first novel while there. Once home, Williams found a small publisher for the novel and enrolled at the University of Denver, where he was eventually to receive both his B.A. and M.A., and where he was to return as an instructor in 1954. Williams remained on the staff of the creative writing program at the University of Denver until his retirement in 1985. During these years, he was an active guest lecturer and writer, publishing two volumes of poetry and three novels, Butcher’s Crossing, Stoner, and the National Book Award–winning Augustus.John McGahern (1934-2006) was one of the most acclaimed Irish writers of his generation. His work, including six novels and four collections of short stories, often centered on the Irish predicament, both political and temperamental. Amongst Women, his best-known book, was shortlisted for the Booker Prize and made into a popular miniseries. His last book, the memoir All Will Be Well, was published shortly before his death.

“A beautiful, sad, utterly convincing account of an entire life…I’m amazed a novel this good escaped general attention for so long.”  —Ian McEwan

“Stoner is a novel of an ordinary life, an examination of a quiet tragedy, the work of a great but little-known writer.” —Ruth Rendell

“A beautiful and moving novel, as sweeping, intimate, and mysterious as life itself.” —Geoff Dyer

“I have read few novels as deep and as clear as Stoner. It deserves to be called a quiet classic of American literature.” —Chad Harbach

“The most beautiful book in the world.”  —Emma Straub

“The book begins boldly with a mention of Stoner’s death, and a nod to his profound averageness: ‘Few students remembered him with any sharpness after they had taken his courses.’ By the end, though, Williams has made Stoner’s disappointing life into such a deep and honest portrait, so unsoftened and unromanticized, that it’s quietly breathtaking.”—The Boston Globe

“Williams’ descriptions of the experience of reading both elucidate and evince the pleasures of literary language; the ‘minute, strange, and unexpected combinations of letters and words’ in which Stoner finds joy are re-enacted in Williams’ own perfect fusion of words.”—n+1

“Stoner, by John Williams, is a slim novel, and not a particularly joyous one. But it is so quietly beautiful and moving, so precisely constructed, that you want to read it in one sitting and enjoy being in it, altered somehow, as if you have been allowed to wear an exquisitely tailored garment that you don’t want to take off.”—The Globe and Mail


“One of the great forgotten novels of the past century. I have bought at least 50 copies of it in the past few years, using it as a gift for friends...The book is so beautifully paced and cadenced that it deserves the status of classic.”—Colum McCann, Top 10 Novels, The Guardian

“Stoner is undeniably a great book, but I can also understand why it isn’t a sentimental favorite in its native land. You could almost describe it as an anti-Gatsby...Part of Stoner’s greatness is that it sees life whole and as it is, without delusion yet without despair...The novel embodies the very virtues it exalts, the same virtues that probably relegate it, like its titular hero, to its perpetual place in the shade. But the book, like professor William Stoner, isn’t out to win popularity contests. It endures, illumined from within.”—Tim Kreider, The New Yorker

“It’s simply a novel about a guy who goes to college and becomes a teacher. But it’s one of the most fascinating things that you’ve ever come across.”—Tom Hanks, Time

“Stoner is written in the most plainspoken of styles...Its hero is an obscure academic who endures a series of personal and professional agonies. Yet the novel is utterly riveting, and for one simple reason: because the author, John Williams, treats his characters with such tender and ruthless honesty that we cannot help but love them.”—Steve Almond, Tin House

“The best book I read in 2007 was Stoner by John Williams. It’s perhaps the best book I’ve read in years.”—Stephen Elliott, The Believer

“John Williams’s Stoner is something rarer than a great novel—it is a perfect novel, so well told and beautifully written, so deeply moving, that it takes your breath away.”—The New York Times Book Review

“Williams didn’t write much compared with some novelists, but everything he did was exceedingly fine...it’s a shame that he’s not more often read today...But it’s great that at least two of his novels [Stoner, Butcher’s Crossing] have found their way back into print.”—The Denver Post

“A masterly portrait of a truly virtuous and dedicated man.”—The New Yorker

“Why isn’t this book famous...Very few novels in English, or literary productions of any kind, have come anywhere near its level for human wisdom or as a work of art.”—C. P. Snow

“Serious, beautiful and affecting, what makes Stoner so impressive is the contained intensity the author and character share.”—Irving Howe, The New Republic

“Perhaps the greatest example of minimalism I’ve ever read...Stoner is a story of great hope for the writer who cares about her work.”—Stephen Elliott

“Stoner by John Williams, contains what is no doubt my favorite literary romance of all time. William Stoner is well into his 40s, and mired in an unhappy marriage, when he meets Katherine, another shy professor of literature. The affair that ensues is described with a beauty so fierce that it takes my breath away each time I read it. The chapters devoted to this romance are both terribly sexy and profoundly wise.”—The Christian Science Monitor