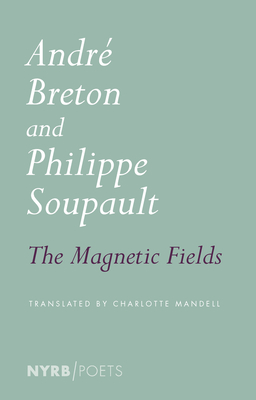 An indispensible classic of French poetry, this is a new translation of Breton and Soupault's experiment with automatic writing, and also the first known work of literary surrealism.

In the spring of 1919, two young men, André Breton and Philippe Soupault, both in a state of shock after World War I, embarked on an experiment. Sick of the literary cultivation of “voice,” sick of the “well-written,” they wanted to unleash the power of the word and to create “a new morality” to replace “the prevailing morality, the source of all our trials and tribulations.” They had a plan. They would write for a week on every day of the week and they would write fast, as fast as possible, in complete secrecy. When the week was over, the writing would be done. No touching up.

This was how The Magnetic Fields, the first sustained exercise in automatic writing, came to be. Charlotte Mandell’s brilliant new translation reveals a key work of twentieth-century literature.

André Breton (1896-1966) was a writer, poet, and co-founder of the surrealist movement. A student of psychiatry and a devout Marxist, Breton saw surrealism as the ultimate means to liberation both personal and political.

Philippe Soupault (1897-1990) was a co-founder of the surrealist movement alongside André Breton. Soupault left surrealism behind following political disagreements with Breton, remaining a lifelong writer.

Charlotte Mandell is a translator of French literature. She has published numerous translations of writers including Jean Genet, Guy de Maupassant, and Gustave Flaubert. She has been awarded a translation prize from the Modern Language Association and the National Translation Award in Prose. She lives in the Hudson Valley of New York.

“With distance, a sort of unity has established itself, and The Magnetic Fields have become the work of a single author with two heads. This double gaze has made it possible, as nothing else would, for Philippe Soupault and André Breton to push forward on the path where no one had preceded them, into these shadows where they were both speaking aloud.” —Louis Aragon

“Fantastic, disconnected but vivid and poetic as though Breton and Soupault were seeing sea life at the bottom of the ocean’s floor: very few of us have the intensity of spirit to live with that sense of life.” —Kimberly Lyons

“Breton and Soupault ushered a freshly new phenomenon of writing into being. Theirs remains the key 20th century collaboration. . . Going forward there was acknowledged precedent for the validity of jointly recording words onto the page as they come, whether borrowed, imagined or otherwise summoned forth from whatever depths.”  —Patrick James Dunagan, Periodicities