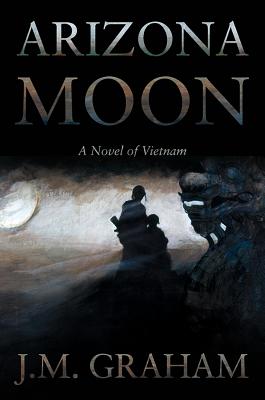 By J. M. Graham
$26.95
Backordered. Place an order and we will let you know when to expect your book.

Tough book to read. Told from several points of view during a brutal time in the Arizona Valley, as it was know by American troops fighting in Vietnam. It paints an ugly picture of what both American and Vietnamese soldiers were going through during the Vietnam war. Well written, flows in a quick fashion and holds everyone in a balanced light. The descriptions of the conditions and the firefights and the day to day existence of of just trying to get by and come out the other end in one piece are vivid, a great war novel that pulls no punches.

In 1967, the infamous Arizona Territory of Vietnam's An Hoa basin was a crucible that forged the souls of men. Through the booby-trapped trails of one of the conflict's most hotly contested free-fire zones, thousands of Vietnamese and Americans fought and died while others learned what it means to finally live.

Arizona Moon binds together the fates of three men who went to war to find meaning, but found only Vietnam. Cpl. Raymond Strader is a Marine Corps squad leader and designated platoon sniper who is counting down the days before he can return to Pennsylvania. LCpl. Noche Gonshayee is an Apache Indian feared by his fellow Marines and who sees any non-Apache as a potential enemy. Truong Nghi is a North Vietnamese Army (NVA) student volunteer caught up in patriotic fervor and is helping an NVA unit move munitions south in anticipation of the Tet Offensive.

Blood is shed when Nghi's NVA unit silently eliminates a listening post lead by Gonshayee and disappears into the night. What the Marine platoon finds in the morning doesn't look like an NVA action, but murder. The comatose Gonshayee is the only suspect.

Fresh from the Arizona Territory, Corporal Strader has only two days and a wakeup remaining of his time in country when bureaucratic expedience rips him away from finalizing his departure paperwork and throws him back into the line of fire. His assignment was supposed to be a simple escort mission to bring a prisoner back to An Hoa. But when the NVA shoot down the helicopter carrying Strader and Gonshayee, a deadly game of cat and mouse breaks out across the face of the Ong Tu Mountains as the NVA desperately try to protect their cargo and the Marines try to save their comrades. Through blood, bullets, and brotherhood, the characters of Arizona Moon are cast into the fire of conflict, transforming into the men they were destined to become.

Compelling and relentless, Arizona Moon presents two sides of a conflict that epitomizes esprit de corps and leaves no one unscathed.