The Art of War: A Graphic Novel (Graphic Classics) (Hardcover) 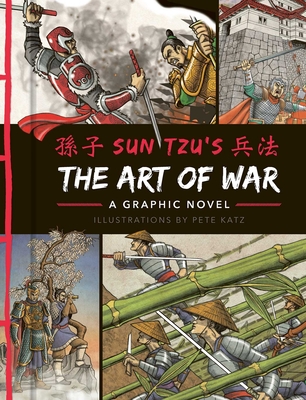 An entertaining graphic adaptation of the oldest military treatise in the world.

Hailed as the oldest philosophical discussion on military strategy, Sun Tzu’s The Art of War has been adapted as a graphic novel by award-winning illustrator Pete Katz. In this collectible thread-bound edition, the narrative focuses on a teacher instructing a pupil on the main points of Sun Tzu’s treatise, with vibrant battle scenes interspersed throughout. Issues such as planning, tactics, maneuvering, and spying are illustrated with full-color scenes, so that readers may gain a greater understanding of principles from the fifth century BC.

Sun Tzu (544 B.C.–496 B.C.) was an ancient Chinese military general, strategist, and philosopher from the Zhou Dynasty, who has had a significant impact on Chinese and Asian history and culture, both as an author of The Art of War as well as through legend.

Pete Katz is a half-Irish, half-Greek illustrator and writer, born in the East End of London. He has been a freelance illustrator for more than twenty years and has worked for clients including Image Comics, Oxfam, Harvey Nichols, Barnes & Noble, Scholastic, Canterbury Classics, and the British Museum. As well as illustrating his graphic novels, he writes and adapts the scripts for most of them and is published worldwide in fifteen languages. Along with working on graphic novels, he also produces portraits, t-shirt graphics, and other commissions.