Come Together: The Business Wisdom of the Beatles (Paperback) 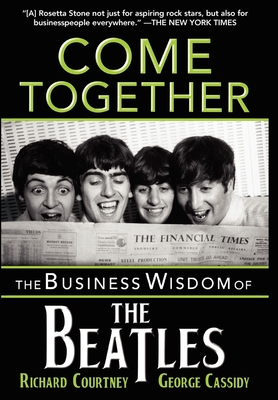 As the greatest rock and roll band of all time, the Beatles rocketed to worldwide fame soon after their 1964 arrival in the United States. Much of their achievement can be attributed to the unique Beatle sound, but it was more than just the music that catapulted them to the summit of success, and kept them there even after the band ceased touring and broke apart. How the Beatles both failed and triumphed as businessmen and the lessons today's entrepreneurs and business leaders can draw from this unique journey is the subject of Come Together: The Business Wisdom of the Beatles. Authors Richard Courtney and George Cassidy recount the band's many exploits, from its early struggles in Hamburg to the success of Sgt. Peppers Lonely Hearts Club Band and beyond, revealing from a business perspective what worked and what didn't. More than the music, this book explores what it took to pass the audition.

Richard Courtney, a dedicated Beatles collector with an encyclopedic knowledge of Beatles history, is the founder of the Fab Four Festival, which attracts top Beatles speakers and fans from across the globe. An alumnus of the University of the South, Courtney is a columnist, author, and real estate broker who lives and works in Nashville. George Cassidy is a working songwriter, using vintage recording equipment that gives him firsthand insight into the Beatles' creative process in the studio. A business writer and analyst who has worked with blue-chip companies like Deloitte Touche Tohmatsu, his work has been translated into six languages and has twice won the highest possible honor from the Society for Technical Communication. A graduate of Harvard University, he lives with his wife and two sons in Nashville.