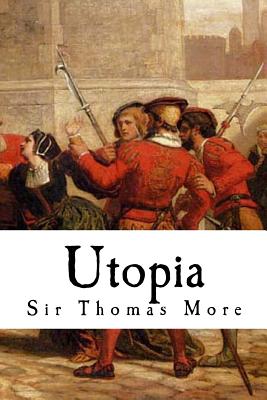 Utopia by Sir Thomas More. Utopia is a work of fiction and socio-political satire by Thomas More (1478-1535) published in 1516 in Latin. The book is a frame narrative primarily depicting a fictional island society and its religious, social and political customs. Many aspects of More's description of Utopia are reminiscent of life in monasteries. The work begins with written correspondence between Thomas More and several people he had met on the continent: Peter Gilles, town clerk of Antwerp, and Hieronymus van Busleyden, counselor to Charles V. More chose these letters, which are communications between actual people, to further the plausibility of his fictional land. In the same spirit, these letters also include a specimen of the Utopian alphabet and its poetry. The letters also explain the lack of widespread travel to Utopia; during the first mention of the land, someone had coughed during announcement of the exact longitude and latitude. The first book tells of the traveller Raphael Hythlodaeus, to whom More is introduced in Antwerp, and it also explores the subject of how best to counsel a prince, a popular topic at the time. Sir Thomas More, son of Sir John More, a justice of the King's Bench, was born in 1478, in Milk Street, in the city of London. After his earlier education at St. Anthony's School, in Threadneedle Street, he was placed, as a boy, in the household of Cardinal John Morton, Archbishop of Canterbury and Lord Chancellor. It was not unusual for persons of wealth or influence and sons of good families to be so established together in a relation of patron and client. The youth wore his patron's livery, and added to his state. The patron used, afterwards, his wealth or influence in helping his young client forward in the world. Cardinal Morton had been in earlier days that Bishop of Ely whom Richard III. sent to the Tower; was busy afterwards in hostility to Richard; and was a chief adviser of Henry VII., who in 1486 made him Archbishop of Canterbury, and nine months afterwards Lord Chancellor. Cardinal Morton-of talk at whose table there are recollections in "Utopia"-delighted in the quick wit of young Thomas More. He once said, "Whoever shall live to try it, shall see this child here waiting at table prove a notable and rare man.