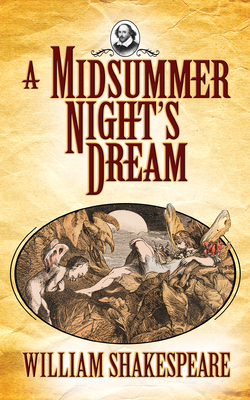 Witness the stages of love, marriage and jealousy as well as all of the mysterious images of romantic desire in this beautiful edition of A Midsummer Night's Dream. A Midsummer Night's Dream, a romantic comedy play by William Shakespeare, is believed to have been written between 1590 and 1596. It is one of Shakespeare's most popular works for the stage and is widely performed throughout the world. Theseus and Hippolyta, wonderful figures from classical mythology, are about to marry. In the woods outside Athens, two young men and two young women finally sort themselves out into couples after first forming one love triangle, and then another. By presenting them as almost interchangeable, Shakespeare probes the mystery of how lovers find compelling, life-shaping differences where there seem to be only likenesses. In the same woods, controlled and manipulated by the fairies who inhabit the forest, we find yet other images of desire in Oberon and Titania, the king and queen of Fairyland, and Bottom, an Athenian weaver who had been magically transformed into an ass-headed monster by Oberon's helper, hobgoblin Robin Goodfellow. King Oberon who is engaged in a near epic battle with Queen Titania over the custody of an orphan boy, uses magic to make the queen fall in love with Bottom, who had come into the woods with his companions - six amateur actors - to rehearse a play for the king's wedding. This "Beauty and the Beast" story adds another dimension as it brings in the power of infatuation to transform the image of the beloved in the lover's eyes.