Ahriman: The Spirit of Destruction (Paperback) 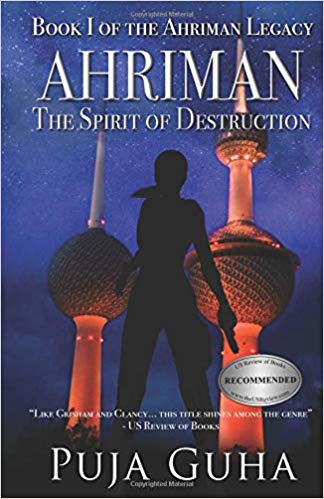 Espionage. Assassins. Middle East. It was the year when global economies continued to plummet despite analysts' predictions of a turnaround. It was the year when the Kuwaiti National Assembly consisted of the largest Islamic contingent in more than two decades. It was the month when the price of oil plunged to twenty dollars a barrel. It was the month when the Emir of Kuwait dissolved the National Assembly for the thirteenth time in fifteen years. It was the day when the head of the Islamic majority of the Assembly hired an assassin and the CIA intercepted intelligence about a new wave of terrorist attacks. It was the day that would change the face of the Middle East forever. It was May 15, 2021. After a disastrous mission forces her out of the field, Petra Shirazi retires from a life of espionage to work in a research position. Three years later, her division stumbles upon a money trail that reveals a massive new wave of terrorist attacks. The money trail places her in the midst of an assassination plot that implicates the highest levels of the Kuwaiti and Iranian governments. Petra will find herself face to face with the Ahriman, a man named for the Persian spirit of destruction who is responsible for a series of bomb blasts that paralyzed the Suez Canal two years earlier. As the investigation begins to unravel, the ripple effects threaten to engulf not only the Middle East and its Western allies, but also the darkest secrets of Petra's past.

Puja Guha draws upon her experiences from traveling and living around the world in her writing. She has lived in Kuwait, Toronto, Paris, London, and several American cities including New York, Washington DC, and San Francisco. Each of these places and many more show up in her writing as her travel to places such as Madagascar, South Africa, Vietnam, Sudan, Afghanistan, and Guinea-Bissau inspire more and more story ideas. She also uses her experience working in international finance and development with the World Bank and Oliver Wyman to delve into global political themes in both her thrillers and literary fiction. She is a graduate of the University of Pennsylvania with work experience in finance and health care consulting, along with master's degrees in public policy from London School of Economics and Sciences Po. She has published three books, two books in the international spy thriller series, AHRIMAN: THE SPIRIT OF DESTRUCTION and ROAD TO REDEMPTION, and literary fiction piece THE CONFLUENCE.