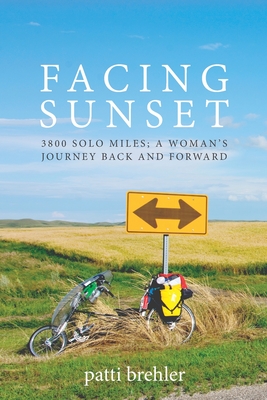 Facing Sunset; a woman's journey back and forward, is a coming-of-a-certain-age memoir framed within sixty-year-old patti brehler's 2016 bicycle tour between her home in northeastern Michigan and Missoula, Montana.

Forty years earlier, patti brehler was one of more than 4000 bicyclists taking part in Bikecentennial '76, a transcontinental ride honoring our nation's 200th birthday. Twenty years old, she flew to the west coast joining a group of strangers riding together from Oregon to Virginia. While patti had two self-supported tours under her wheels before Bikecentennial '76, those eighty-four days cemented her ride-her-own-road approach to living. Dipping her front wheel in the Atlantic left her yearning for more: an open-ended adventure, a "Forrest Gump" ride: riding until desire for discovery disappeared. Only then would she be done.

Years later, patti learned of the Adventure Cycling Association's 40th anniversary Bikecentennial '76 celebration. A break between family caregiving responsibilities made for good timing. How cool would it be to ride to Missoula for the party? And after? Perhaps a real chance for her open-ended ride.

Off she went, despite a belly full of butterflies, solo and with her husband's blessing. Well-equipped to handle mechanical breakdowns, patti knew how far to push her body. She adjusted her route on the fly, using Adventure Cycling maps, carrying everything she needed for daily camps and meals. Taxed by wind, strangers energized her, while mystical animal appearances assured she was on the right path.

More than a bicycle travelogue, Facing Sunset reflects on a rebellious, pioneering life; affirms what a woman can accomplish against physical and metaphorical headwinds; and witnesses the people populating our vast and wondrous country-who are more alike than different when the veils of politics are stripped away. The author traces how a lifelong dream brought her to the right place in her life, "facing sunset," even as the reality of riding her "own ride" wasn't quite what she expected.

Interested in a first-hand experience pedaling across the country without actually sweating? Sit with patti on her comfortable recumbent bicycle. Meet headwinds, heat, arduous climbs, thrilling downhills, otherworldly landscapes, and synchronistic encounters. Share patti's positive interactions with strangers, a reminder there is hope for humanity. Struggle with her as she debates what "being done" means, even as she comes to terms with her place in the universe.

"I hover among stars at the brink of earth and water, existing in human form this brief moment of time, occupying a nano-space of no consequence, at once all and nothing," she writes her first night out. Her way of being in the moment and trusting herself is an inspiration to anyone finding their own, particular way through life.