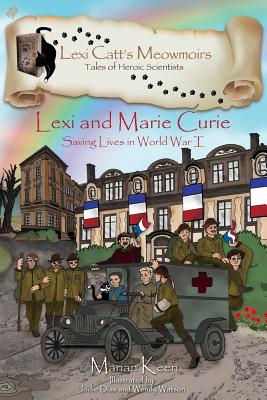 In Lexi and Marie Curie Saving Lives in World War I, Lexi lives in France with the Curie family at the beginning of the 20th century. When injured soldiers return from the warfront, Marie realizes the need for x-ray services, and sets to work providing these to the doctors at the front. In doing so, she saves countless lives and limbs.

Lexi and Marie Curie is the second book in the series Lexi Catt's Meowmoirs--Tales of Heroic Scientists, a series of middle-grade stories for children. The first book was Lexi and Hippocrates Find Trouble at the Olympics. These meowmoirs bring to life famous people and significant milestones in science, medicine, and human development, as well as some of the events of the characters' eras, such as the Ancient Olympics and World War I.

Lexi Catt has lived eight of his nine lives, and his purrpose now is to write his tails of adventure in his meowmoirs. He has a peculiar attraction to trouble; fortunately, the strange twitch of his tail warns him when trouble is near. For this reason, he has always lived with scientists or doctors of medicine.

Books in the series include:

"This is a fascinating and unusual book for readers in intermediate grades. 'Lexi and Marie Curie' introduces readers to the amazing story of scientist Marie Curie, whose isolation of radium, among other discoveries, led to her being awarded the Nobel Prize in both Physics and Chemistry. Shut out of much of the formal scientific academy, Marie forges her own path, one that paves the way for her daughters and for generations of girls and women whose curiosity is sparked by 'STEM' - science, technology, engineering and math. Author Marian Keen's eye for detail draws the reader into Marie Curie's life, her triumphs and disappointments. Published to coincide with the centenary of the start of the Great War, the book brings readers back to the tremendous upheaval of this terrible conflict...'Lexi and Marie Curie' will encourage girls, in particular, not to take "no" for an answer and to rely on their wits and ingenuity to find a solution to even the most difficult problems that life throws their way."