The Bold and Cold: A History of 25 Classic Climbs in the Canadian Rockies (Hardcover) 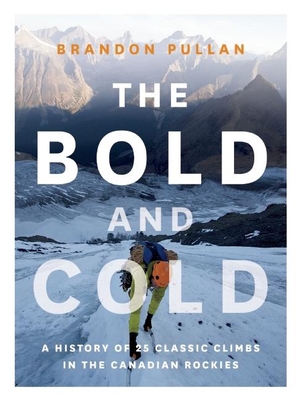 Over the past 100 years, climbers have been pushing standards in the Canadian Rockies. From long alpine ridges to steep north faces, the Rockies are synonymous with cutting edge ascents. Peaks such as Robson, Chephren, Kitchener, Twins and Alberta elude the many and reward the few. Many of the big faces were climbed between the 1960s and 1990, the golden age of alpinism in the Rockies. The men and women who first were part of the golden age set high standards. Future alpinists read old journals and guidebooks, hoping to experience what the alpine "pioneers" did. The Rockies require a certain edge that comes with age, humiliation and failure, for most. Perhaps the ones who drink the most whiskey, dream of the biggest peaks and sleep with snowballs in their hands are the ones rewarded with the momentary triumph of coming to a draw with one of these mountains. This is not a guidebook, rather a story book by the people who risked life and limb to establish long and difficult climbs in the style of bold. What kind of climb? The scary kind of climb, the kind that will send most packing and the kind that rarely gets climbed, but often are dreamed about. They demand every inch of one's physical, mental and spiritual self being. The kind that might, has and could kill. These climbs are not for the weak of heart, the beginner or even the advanced climber. They are for a rare breed. A breed that through experience in harsh and unpleasant situations have honed their skills in a manner that allows them to ante up. The mountains dictate the route and conditions, the climbers dictate the style. These routes are perhaps enjoyed best through the words of others, the pictures taken with frosty lenses and numb fingers, the stories told by the bold souls who knowingly stepped into the spiritual, mental and physical struggle these mountains offer. Suffering, unforgiving circumstances, where if mistakes are made there is a price to pay. The grades are trivial, for it is the experience, not the difficulty that defines the route. These are not any-given-weekend routes. Many factors must align for an ascent to go down, conditions of both the route and the climber must be tip top. These routes are for occasions when the mind and body need a check, a good check. With an increasing number of people entering the world of climbing, it is important to keep these stories close. To know a small group of climbers including Canadian, European, American and South Africans made bold decisions that brought the world's attention to Canada. Legends were born, men died. The mountains made of rotten rock, ice and snow kept the stakes high. Once the summits were had, the walls had to be had. Nearly 100 years after the rise of alpinism in Europe, it began in Canada. The 1860s are for Europe what the 1960s are for Canada. The peaks had been climbed and it was time for the faces. The pursuit of difficulty on steep terrain, ice and rock marked the dawn of the golden era and the 25 bold and cold.

Brandon Pullan graduated from Ontario's Lakehead University and moved to Canmore, Alberta, shortly after finishing his studies. After spending his youth climbing the hard and steep winter routes found in Canada's eastern mountains, he found himself feeling right at home in the Canadian Rockies and eventually became a guide with the Association of Canadian Mountain Guides. He spends as much time as he can climbing and has conquered some of the most classic alpine routes in North America and Europe. One of his recent noteworthy climbs was the second ascent of Abron's Ridge of the North Twin out of the Black Hole in the Canadian Rockies, first climbed in 1965. Brandon started writing for publications in the late 90's and is now the editor-in-chief of Gripped, Canada's climbing magazine. He has over 100 published articles in print and countless contributions can also be found online. His alpine pursuits have introduced him to dozens of legendary climbers and mentors, motivating him to compile and archive collections of stories from this older generation of mountaineering greats. Brandon lives in Canmore, Alberta, Canada.