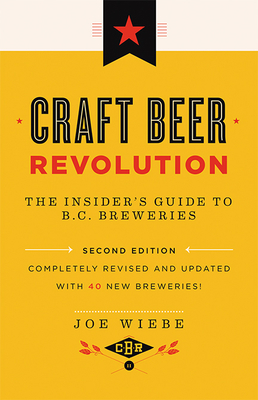 The most detailed collection of craft beer breweries is now more comprehensive than ever Since the first edition of Craft Beer Revolution was published, fifteen new BC breweries have opened and another eighteen are scheduled to open by the end of 2014. Joe Wiebe, the Thirsty Writer, revisits the established and explores the province's freshest new hoppy IPAs and strong stouts in this completely revised and updated guide. Microbrewing has exploded into a significant figure in the marketplace--the market share for artisanal beer climbed to 19 percent in 2013--and craft beer has become prominent in restaurants, taprooms and craft beer converts are carrying home growlers of creative and delicious brews. From the Kootenays to the west coast of Vancouver Island, the craft beer scene is booming. With profiles of BC's finest craft breweries, as well as tap lists, bottle shops and an insider's look at the people behind the kegs and casks, this second edition of Craft Beer Revolution explains how to best experience the beer phenomenon that's sweeping the province.

Joe Wiebe is one of Canada's leading beer writers and has been telling the stories of BC's craft beer community since 2006. His writing has appeared in publications throughout Canada and the Pacific Northwest, including enRoute, BC Business, The Globe and Mail, and Beer West and Taps magazines, and his first book, Craft Beer Revolution: The Insider's Guide to B.C. Breweries, won the Gourmand Award for the Best Beer Book in Canada.