The Autumn Ghost: How the Battle Against a Polio Epidemic Revolutionized Modern Medical Care (Hardcover) 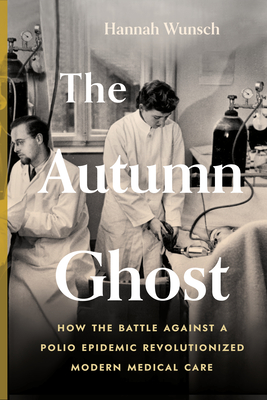 For readers of Pale Rider comes a suspenseful account of how the battle against a mid-century polio epidemic sparked a worldwide revolution in medical care.

Americans knew polio as the "summer plague." In countries further North, however, the virus arrived later in the year, slipping into the homes of healthy children as the summer waned and the equinox approached. It was described by one writer as "the autumn ghost."

Intensive care units and mechanical ventilation are the crucial foundation of modern medical care: without them, the appalling death toll of the COVID-19 pandemic would be even higher. In The Autumn Ghost, Dr. Hannah Wunsch traces the origins of these two innovations back to a polio epidemic in the autumn of 1952. Drawing together compelling testimony from doctors, nurses, medical students, and patients, Wunsch relates a gripping tale of an epidemic that changed the world.

In vivid, captivating chapters, Wunsch tells the dramatic true story of how insiders and iconoclasts came together in one overwhelmed hospital in Copenhagen to save the lives of many polio patients dying of respiratory failure. Their radical advances in care marked a turning point in the treatment of patients around the world--from the rise of life support and the creation of intensive care units to the evolution of rehabilitation medicine.

Moving, gripping, and informative, The Autumn Ghost will leave readers in awe of the courage of those who battled the polio epidemic, and grateful for the modern medical care they pioneered.

Hannah Wunsch is a critical care physician and researcher at Sunnybrook Health Science Centre. She is a professor of anesthesiology and critical care medicine at the University of Toronto and holds a Canada Research Chair. She lives in Toronto, Ontario and Woods Hole, Massachusetts. The Autumn Ghost is her first book.