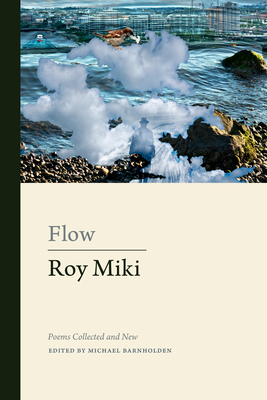 Roy Miki grew up in Winnipeg and moved to Vancouver in 1967. He has published widely on Asian Canadian writing, Canadian literature, cultural activism, and contemporary poetry, and has edited works by George Bowering, bpNichol, and Roy K. Kiyooka. He is the author of Redress: Inside the Japanese Canadian Call for Justice (2004) and In Flux: Transnational Shifts in Asian Canadian Writing (2011), as well as six books of poems. His third book of poems, Surrender (2001), received the Governor General's Literary Award for Poetry. Cloudy and Clear, his most recent book of poems, is part of Flow. With his wife, Slavia Miki, he has also co-written a children's book, Dolphin SOS (2014), awarded the 2014 Christie Harris Illustrated Children's Literature Prize. Roy taught in the English department at Simon Fraser University for over thirty years. He received the Order of Canada in 2006 and the Order of British Columbia in 2009.